Posted on November 18, 2020 by Stephen D. Haner
Share this article on: 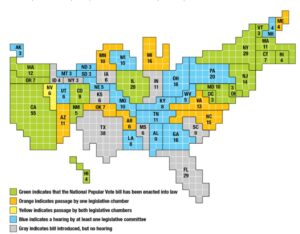 The battle is now rejoined to kill the Electoral College and elect a U.S. President in 2024 based purely on the national vote total. The stubborn refusal of President Donald J. Trump and many other Republicans to accept the November 3 outcome is likely to become a new talking point for Electoral College foes.

Trump and his legal team see a path to victory if they can reverse votes in a handful of states he narrowly lost, by challenging votes or forcing recounts. Without the Electoral College process, the effort would be futile in the face of President-elect Joe Biden’s huge popular vote margin of victory. If the public grows tired of or even angry over the dispute, scrapping the Electoral College entirely may become more attractive.

With House Bill 177, the Virginia House of Delegates voted earlier this year to have Virginia join a compact of other states which have agreed to award their votes in the Electoral College to the highest national vote recipient, without regard to the outcome among their own state’s voters.

That bill was carried over to next session in a State Senate committee, but under Senate rules could be revived if voted on by early December. The chair of that committee, Senator Creigh Deeds, D-Bath County, told Bacon’s Rebellion today he will not be calling that meeting to look at carry-over bills.

But he also said his main objection to the idea in February was that it might be seen as an effort to affect this year’s election. That concern is now passed, and the 2024 election is far in the future. Fresh bills will be introduced in January.

Deeds had made similar comments, but no announcement about the meeting, in a Richmond television interview a few days ago. But in the interview, which you can watch or see here, he also sounded open to the proposal. Only one Democrat WRIC Channel 8 talked to, Roanoke Senator John Edwards, expressed opposition. He believes the approach of the compact violates the United States Constitution, which established the Electoral College. He wants to scrap it, but not via the compact.

The final weeks of campaign coverage and now the post-election disputes over a relative handful of votes illustrate the importance of the Electoral College.  There might not have been any suspense at all had it not been possible to win the White House without winning the popular vote, as has happened several times in American history including 2016.

Some hoped that an election where the popular vote total matched the Electoral College outcome might dampen the ardor for change.  It is not to be, and Virginia’s coming decision on the issue will matter greatly. The close outcome has also revived the idea of awarding electoral votes by the outcome in individual congressional districts, not by state, but implemented nationally that helps the Democrats, too.

Ending the Electoral College is the major step still outstanding in the well-executed Democratic Party effort to remake American elections. The same master plan, played out over the past few years in Virginia and other states, has been built on the presumption that a massive increase in voter participation would accrue to Democratic benefit. It did this time. Republicans now need to learn to play on this new field.

The steps that built that record turnout included easier restoration of rights for felons, ending photo identification requirements, expanding absentee and early voting opportunities, and allowing ballots arriving post-election to get counted. In Virginia, the Democrats even tried to remove the need for a postmark on mailed absentee ballots and did end the requirement for a witness signature.

were individual pieces in a plan not to cheat or steal the election, but to change the rules in ways Democrats considered favorable to their chances. And when it was done through legislative actions, fine, that’s how the game is played. Doing it through regulations or judicial activism is more debatable.

An end to the Electoral College would be the jewel in the crown, creating an incredible uphill climb for any future GOP contender. The key lesson of legislative life is “what goes around, comes around,” and some Democrats may think hard about what happens when a future national popular votes goes against them. But short-term thinking is all the rage these days.

A version of this commentary originally appeared on November 9, 2020 in the online Bacon’s Rebellion.

Stephen D. Haner is Senior Fellow for State and Local Tax Policy at the Thomas Jefferson Institute for Public Policy. He may be reached at [email protected]
View all posts by Stephen D. Haner →
This entry was posted in Politics. Bookmark the permalink.