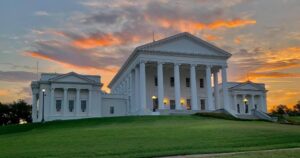 The highest priority on a Virginia energy reform agenda proposed a few weeks ago was restoring State Corporation Commission oversight over decisions on massive renewable energy investments.  Under current law, the General Assembly has basically dictated billions of dollars in such future investments, responding too often to donor demands.

Several bills are pending at the 2022 General Assembly to accomplish that goal, some more comprehensive than others but all with merit.  Many of the reform bullet points are checked off.  The bills are in the House of Delegates and must be acted upon by February 15.

Other elements of the agenda, addressed below, have also been translated into proposed legislation.   First for attention are the bills restoring the SCC’s proper independence and oversight.

Three Republican-sponsored bills would reverse in whole or in part the 2020 Virginia Clean Economy Act, which deemed major solar, offshore wind and battery projects “in the public interest” and directed the state’s major utilities to undertake them on a schedule.  The projected consumer cost of that and other General Assembly decisions became a significant campaign issue last November, with GOP candidates including new Governor Glenn Youngkin promising to address it.

The three proposals are worth discussing, including one of them already rejected by the Republican-controlled House Commerce and Energy Committee.  That proposal, the simplest, was House Bill 839 by Delegate Tony Wilt, R-Harrisonburg.  It did not change the demands now in the law to soon eliminate the use of fossil fuels but gave back to the SCC authority to reject projects it deemed as unnecessary, unreasonable or imprudent.

Its fate was reported last week elsewhere, perhaps indicating the likely outcome for the other two major bills.  None are expected to survive the Virginia Senate anyway, as the committee on that side is dominated by Democrats 12-3.   But there were hopes some reforms would pass in the House, generating debate and media attention.

The broadest bill is House Bill 118, sponsored by Delegate Nick Freitas, R-Culpeper, billed as full repeal of VCEA.  It covers the waterfront, removing the renewable energy targets, the wind and solar mandates, and even authorization for Virginia’s participation in the Regional Greenhouse Gas Initiative (RGGI).  It also reaches beyond VCEA.

Sections appear to remove provisions that direct how the utilities will charge customer for the disposal or safe storage of all the coal ash at its generating facilities.  That is a major expense for customers, without doubt, but takes the bill beyond the question of VCEA repeal.  It is unclear what the effect of that would be, and a very thin and content-free impact statement from the SCC doesn’t mention it.

The most obnoxious practice of recent General Assembly majorities (of either party) has been to designate some major utility expense as “in the public interest,” ending SCC discretion.  This bill commits that very sin again, this time for planning and engineering a new nuclear plant.  If tying the SCC’s hands is wrong for wind or solar it is also wrong for nuclear, despite its merits.

House Bill 73, from Delegate Lee Ware, R-Powhatan, has a narrower focus than the Freitas bill, but accomplishes the main task of restoring SCC oversight.  It should be the SCC deciding how much solar, how much wind, and how much battery backup, is “reasonable and prudent” and will be needed for reliability.  It also changes some rules on energy efficiency mandates.

Restoring the SCC’s traditional authority over utility rates and refunds is the purpose House Bill 1288 from Delegate Sally Hudson, D-Charlottesville.  That, too, is in the spirit of the reform proposal and is pending in a House Commerce and Energy subcommittee, likely to be heard soon.

The national movement to ban the use of natural gas in residences and businesses has come to Virginia, is being answered by House Bill 1257, creating and protecting a right to natural gas service in state law.  This was another of the bullet points in the reform agenda that could prevent major expenses for millions of Virginians.  If a Democratic local government (such as Richmond’s) wants to close its municipal gas utility to prove its climate change bona fides, the bill would require it sell the utility instead.

Yet another major reform recommendation dealt with eliminating or limiting campaign contributions from the various vested interests, including the utilities, advocacy groups and the companies who develop generation in any form and profit from these decisions.  Bills that would have imposed general contribution limits on everybody involved have failed, but still pending are bills that prohibit contributions from the utilities.

Senator Richard Stuart, R-Montross, has Senate Bill 568, which prohibits contributions from any public utility, similar to the approach taken by Senate Bill 45 from Senator Chap Petersen, D-Fairfax.  Stuart announced last week that Governor Glenn Youngkin (R) would like to see such a bill pass so he can approve it.  Youngkin would probably also sign House Bill 71, from Delegate Ware, which affects only Appalachian Power Company and Dominion Energy Virginia.

Finally, the list of recommendations included making a change on the State Corporation Commission.  One of the principal authors of the VCEA is now serving there, filling out an unexpired term which is about to end.  Her reelection to a full term has not been acted on either way.  There are news reports she has become a chip in the trading game over appointments that develops when one party controls the House and the other the Senate.

Whatever happens with that appointment is less important than the fate of the various bills addressed above.  If the proper role of the SCC is restored, and the Commission must focus on consumer cost, system reliability and the prudence of proposals; if the General Assembly stops making and changing rules every session, the process will produce better results.

Stephen D. Haner is Senior Fellow for State and Local Tax Policy at the Thomas Jefferson Institute for Public Policy. He may be reached at [email protected]
View all posts by Stephen D. Haner →
This entry was posted in Energy, Environment, Government Reform, State Government. Bookmark the permalink.