Posted on February 1, 2022 by F. Vincent Vernuccio
Share this article on: 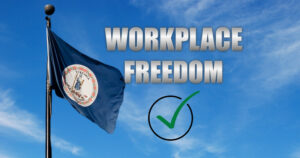 Those provisions are unpopular with Virginia voters.  The results may be found by clicking here.

The Institute asked Mason-Dixon Polling & Strategy to include four labor policy related questions on a recent survey of 625 registered Virginia voters. The issues touch on policies that have surfaced in local ordinances allowing government union collective bargaining, but could be addressed in statewide legislation or executive action.

Eighty-three percent of overall respondent’s, including more than 2/3rds of Democrats, support allowing public employees the right to leave and stop paying a union at any time. Many local ordinances allow unions to lock public employees into paying union dues for up to a year, even after they resign their union membership.

Similarly, 82 percent of respondents (76 percent of Democrats) support good bookkeeping practices protecting employees’ paychecks by requiring public employers to get a signed form directly from an employee before union dues are withheld from their paycheck, rather than simply taking a union’s assurance that the employee wants to pay dues.

By an eight to one margin respondents agree that if a public employee is doing union work while on the job they should be paid with union funds instead of taxpayer dollars.

Delegate Nick Freitas and Senator Mark Obenshain have introduced a suite of bills to address these issues and help protect the rights of public employees, promote union democracy and protect taxpayers. You can read more about the legislation here.

“It is clear that the many provisions of local ordinances allowing government union to collectively bargain are out of step with Virginian voter’s values,” said F. Vincent Vernuccio, Visiting Fellow with the Thomas Jefferson Institute

He continued, “Counties such as Fairfax, Arlington, Loudoun, and cities such as Alexandria and Richmond are doing favors for special interests to the detriment of hard-working public employees and taxpayers. While these localities are putting government union interests above others, lawmakers in the Richmond and the Younkin administration can protect them at a state level with commonsense reforms.”

For more information on see “Securing Workplace Freedom and Rights: Ideas for the New General Assembly” and “Virginia Collective Bargaining: Recommendations and models for local collective bargaining in Virginia” available by clicking here.

Polling results and methodology may be found in this report from the polling organization, which has a long history of sampling Virginians on campaign and policy questions without any partisan leaning by the firm.

Vincent Vernuccio is a visiting fellow at the Thomas Jefferson Institute, a senior fellow at Virginia Works, and a senior labor policy adviser for Workers for Opportunity.  He may be reached at Vinnie@vernucciostrategies.com.
View all posts by F. Vincent Vernuccio →
This entry was posted in Business, Labor, Local Government, Public Sector Unions, State Government, Workplace Freedom. Bookmark the permalink.