Posted on December 8, 2021 by Stephen D. Haner
Share this article on:

Governor-elect Glenn Youngkin told a business group audience Wednesday afternoon that he intends to withdraw Virginia from the Regional Greenhouse Gas Initiative. His decision came two days after Dominion Energy Virginia filed a petition to increase the RGGI tax on its bills by 83 percent next year.

“RGGI describes itself as a regional market for carbon,” Youngkin told a meeting of the Hampton Roads Chamber of Commerce. “But it is really a carbon tax that is fully passed on to ratepayers. It is a bad deal for Virginians. It is a bad deal for business and as governor, I will withdraw us from RGGI by executive action. I promised to lower the cost of living in Virginia and this is just the beginning.”

The Thomas Jefferson Institute for Public Policy sought to dissuade the state from joining RGGI and imposing this carbon tax and has reported on the development and imposition of Dominion’s bill added to collect it. We applaud this decision, knowing that Youngkin may face a struggle to implement it.

Virginia has been part of the interstate tax, cap and trade compact for a year now. Every large electrical generating facility in the state must buy allowances in a multi-state auction equal to the number of tons of carbon dioxide its operations will emit. With the only large fleet of Virginia coal and gas generators, this is basically about Dominion Energy Virginia and its 2.6 million customer accounts.

During the four RGGI allowance auctions held in 2021, Virginia collected about $228 million from the sale of CO2 allowances.  Dominion has been buying them since 2020, but in September of this year added a cost line to all of its customer bills to collect that money back from customers, with interest and even some profit.

The State Corporation Commission reviewed and approved an initial charge of $2.39 per 1,000 kilowatt hours of usage, starting this past September, but that was always a backward-looking figure. Allowance costs have been far higher than originally projected by the Governor Ralph Northam administration when it peddled this idea to the General Assembly. The knowing underestimate is also something the Jefferson Institute warned about years ago.

Looking at the 2021 RGGI allowance costs, on December 6 Dominion sent the SCC its first annual update for the special charge on its bills. It wants to increase that $2.39 per 1,000 kWh to $4.37, an 83 percent jump in just one cycle. Even that may not be enough for Dominion to have fully recovered the cost of RGGI allowances it will have used in its first two years.

All customers pay this tax, of course, not just residential users. All customers of any size pay the same amount, with no volume discount. So $4.37 per kWh represents an even higher percentage of the typical bill for a large industrial or commercial user.  The SCC’s process for reviewing this will have to proceed despite Youngkin’s announcement, which at this point is just a proposal. If he succeeds with the withdrawal, Dominion will likely still recover its costs to that point.

The previous governor, Terry McAuliffe, started the process of requiring electric utilities to pay for carbon allowances as a proposed air pollution regulation. The General Assembly split on partisan lines on the proposal with Republicans throwing up roadblocks when they had the votes. Once the Democrats won full control in the 2019 election RGGI proceeded. 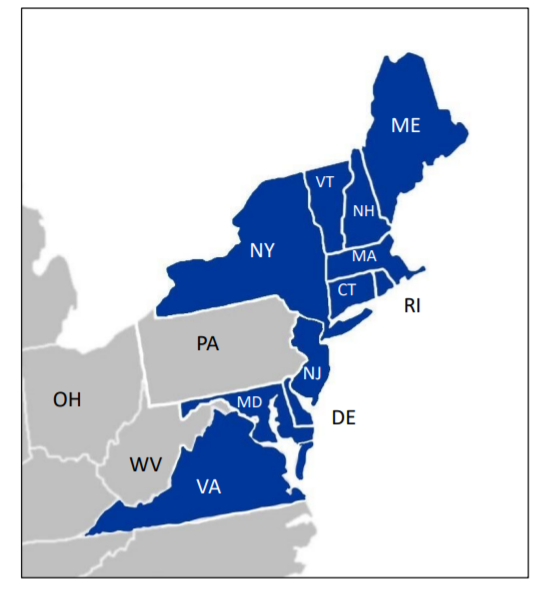 The 2020 Virginia Clean Economy Act and other bills “authorized” the executive branch to participate in RGGI and implement the regulation, but no law mandates that Virginia remain in RGGI and continue to require the allowances. The Memorandum of Understanding behind the interstate compact allows for withdrawal by member states upon notice. Regulations can be amended or repealed within the executive branch.

Youngkin’s exact plan or timetable for extraction was not detailed. Other laws passed under Governor Northam create broad goals for reducing or eliminating the use of fossil fuels throughout the Virginia economy, including for power production, and if those transformations take place as planned those higher costs are also coming the way of Virginia consumers.

First out of the box with a comment today was future Speaker of the House Todd Gilbert, R-Shenandoah, praising Youngkin’s decision while also pointing out that Virginia was already reducing its CO2 emissions before any RGGI tax was created.

“When a policy costs the public a significant amount of money for no tangible benefit, that policy should be examined carefully, and if practical, rolled back. Governor-elect Youngkin’s announcement is a perfect example of the common-sense decision making we’ve been missing for the past 8 years,” Gilbert wrote.

Stephen D. Haner is Senior Fellow for State and Local Tax Policy at the Thomas Jefferson Institute for Public Policy. He may be reached at steve@thomasjeffersoninst.org.
View all posts by Stephen D. Haner →
This entry was posted in Economy, Environment, Government Reform, State Government, Taxes. Bookmark the permalink.