Posted on September 30, 2021 by Stephen D. Haner
Share this article on: 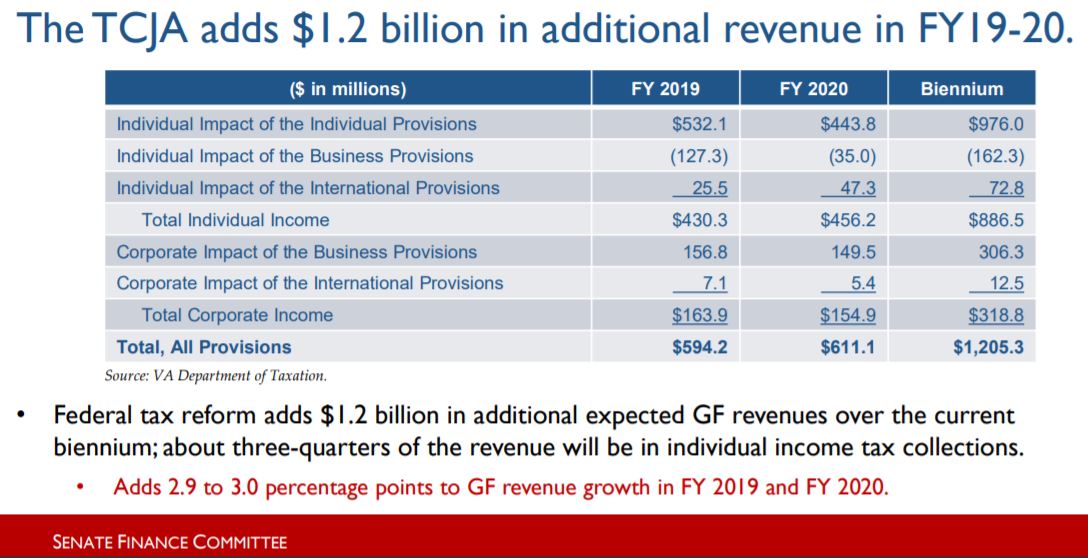 Senate Finance Committee data illustrated the expected state revenue boost caused by 2017 federal changes. Predicted and seen in 2019 and 2020, it carried over into 2021.

At the September 28 debate Democratic gubernatorial nominee Terry McAuliffe dismissed the 2021 $2.6 billion general fund revenue surplus as entirely due to extra federal COVID relief funds, which is absurd on its face. By definition, every dollar is General Fund state tax revenue. It came from some form of state tax.

Why do Virginia Democrats continue to deny that recent state tax law changes are in part responsible for almost-embarrassing large cash surpluses recently announced? At the time the deeds were done, nobody was denying the big revenue impacts. The really big hit was a totally bipartisan decision, so Democrats can share the credit or blame.

Federal money flows in and out of a separate category known as non-general funding. Is there another part of the surplus lurking out there, left-over non-general funds raised during fiscal year 2021 but not spent in that period? Was it indeed made fatter by unspent federal dollars? Yes. It is just not included in the big reports shared and discussed in the public meeting of the legislative money committees.

One non-general fund surplus that was reported is in the state’s transportation funds, where federal funds do mix in. Add it to the general fund surplus, and the total is now about $3 billion. It is 100% certain that the 2020 transportation tax increases contributed substantially to that surplus. The gas tax went up a nickel per gallon in some parts of Virginia, 12.6 cents per gallon in all other parts of the state, and an entirely new statewide highway user fee (tax) was imposed on annual vehicle registrations, all July 1, 2020.

The largest element of the $2.6 billion general fund surplus can be traced back to the decisions made by the 2019 General Assembly to keep most of the state revenue windfall generated by the 2017 federal tax code changes. Republicans then ran the committees that made those decisions and fought like COVID-ridden kittens to protect us from that coming state tax hike.

But nobody hid the financial impact. State Secretary of Finance Aubrey Layne (now out of office so let’s admit, a Republican) invested in some excellent financial modeling that showed a revenue surge coming, and then later on confirmed the models were proving fairly accurate. All of these developments were reported on in my column in Bacon’s Rebellion far more than anywhere else.

The impact of the state’s failure to adjust its rates or standard deduction to match congressional actions had the greatest impact on business taxpayers using the corporate income tax. Revenue in the fiscal year just ended rose more than 80% over four years prior.

Two years ago, Layne was quite open about how the federal “tax conformity” windfall also ballooned the state’s 2019 surplus. Now the standard line is, what tax conformity windfall?

The other major contributor to the general fund surplus (and somewhat to the transportation surplus) was sales taxes collected on remote sales through the Internet, hard to collect from the seller prior to a court decision. That was a good policy decision. But people pay more tax after it passed, and it fattened the surpluses.

All the signs are this explosion of state revenue is just getting started (the September reports will be telling). The fiscal year we are now in will reflect the second part of the gas tax increase, the new tax on electric bills tied to the Regional Greenhouse Gas Initiative, and another round of state taxes on Payroll Protection Program (PPP) grants and a similar state grant program helping employers maintain staffing during the recession.

That is the one part of the recent surpluses where McAuliffe’s claim that federal funds are responsible has some truth. Had there not been billions flowing into Virginia for PPP grants and loans, Virginia would not have been able to skim its 6 percent off the top with its income tax. The General Assembly could have made another decision, not to tax, and the failure to do so was – again – disappointingly bipartisan.

The argument over the explanation for the surplus is a sideshow to the real campaign debate, which is whether some tax cuts in compensation are called for. To his credit, Republican nominee Glen Youngkin has routinely recognized that tax hikes built the surplus and tax cuts of some form are called for. The elements of his proposed tax cuts line up well to partially reverse the recent increases.

Search in vain for tax cuts promised by McAuliffe, even those sought by liberal allies who complain (with justification) that Virginia taxes lower income workers too heavily. Youngkin’s idea to eliminate the sales tax on groceries, in particular, was pulled straight off their wish list.

Would there still have been a revenue surplus had the state fully adjusted to prevent a “tax conformity” windfall, or failed to adopt the Wayfair sales tax rules, or skipped some other changes? Perhaps. The COVID federal funds did stimulate personal spending and maintain jobs. But absent those changes the excess revenue would have been far, far smaller.

Stephen D. Haner is Senior Fellow for State and Local Tax Policy at the Thomas Jefferson Institute for Public Policy. He may be reached at steve@thomasjeffersoninst.org.
View all posts by Stephen D. Haner →
This entry was posted in Economy, Government Reform, State Government, Taxes. Bookmark the permalink.