Most States Outperform Virginia Over Past Decade 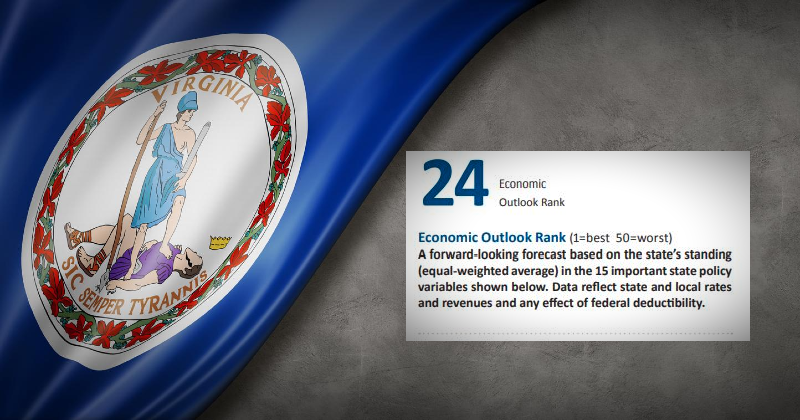 As measured by the American Legislative Exchange Council (ALEC), Virginia’s economic outlook has continued its precipitous drop and now barely ranks in the top half among the American states, 24th out of 50. A decade ago it was in the top five, ranking third in 2011 and 2012 and fifth in 2013.

Using three direct measures of actual economic performance, gross domestic product and job growth and population out migration, ALEC placed Virginia 30th among the 50 states over the past decade.  Neighboring North Carolina, on the other hand, ranked 12th in recent economic performance and second in economic outlook.

Virginia’s number 24 ranking in the annual “Rich States, Poor States”comparison will be dismissed by some as less important than other indicators of competitiveness, including the ultimate bragging point of being number one in the last CNBC ranking of best states for business.  But the downward trend is dramatic, Virginia having ranked 17th last year and dropping seven places in this survey.

And Virginia’s economic performance, including job recovery since the bottom of the COVID-related recession, continues to lag several other states.  It was 31st in the 2021 ALEC survey, using data from before the pandemic.  Examining what has changed among the 15 criteria since Virginia ranked near the top may offer some explanations.

On two of the fifteen criteria Virginia receives a perfect score, but in both cases, there have been recent legislative efforts to reverse them.  The first is the Right to Work Law.  The other is the lack of a state inheritance tax, which would surely be among the proposals if the Democratic-controlled Virginia Senate gets the comprehensive tax study it is demanding before any tax cuts.

Change those, and Virginia is down in the bottom half.

During the period of full Democratic control of state government, the 2020 and 2021 General Assembly sessions, the state adopted a minimum wage higher than the federal requirement, now up to $11 per hour and heading higher.  That moved the state down in the ALEC rankings, as did a measure of “recently legislated tax changes.”  Those were projected to cost citizens $1.80 per $1,000 of personal income.

Only three states ranked lower than Virginia on the “recent changes” measure, a result of the various tax increases approved in 2020 and 2021.  On that same measure, North Carolina ranked second in the country because its recent legislative tax changes reduced collections $2.38 per $1,000 of personal income.

With several of the ALEC measures tied to individual tax burden, the tax cuts still pending at the overtime General Assembly session could improve a future report on Virginia’s economic prospects.

Should all or most of the stalled Virginia tax reductions pass, Virginia’s next “recent changes” measurement would go positive, indicating less tax burden per $1,000 of income, although we would still be competing with the many other states lowering taxes in the midst of the revenue surge.

The higher standard deduction would make the income tax more progressive, another of the ALEC tests, and the elimination of sales taxes on groceries would result in lower taxes from that source per $1,000 of personal income, another ALEC measure.

Worker’s compensation costs per $100 of payroll and the state’s legal climate are other areas where Virginia’s ranking deteriorated compared ten years ago, when it ranked third in the country.

Looking at some other nearby states:

The authors of the annual Rich States, Poor State report are economists Arthur Laffer and Stephen Moore, and ALEC Executive Vice President and Chief Economist Jonathan Williams.   Delegate Kathy Byron, a Republican from Forest and chair of the House Commerce and Labor Committee, is Virginia’s representative on the ALEC Board.

The data come from various sources, including the U.S. Census Bureau, Bureau of Economic Analysis, the Federation of Tax Administrators and the U.S. Chamber of Commerce Institute for Legal Reform.

Stephen D. Haner is Senior Fellow at the Thomas Jefferson Institute for Public Policy.  He may be reached at steve@thomasjeffersoninst.org.

Stephen D. Haner is Senior Fellow for State and Local Tax Policy at the Thomas Jefferson Institute for Public Policy. He may be reached at steve@thomasjeffersoninst.org.
View all posts by Stephen D. Haner →
This entry was posted in Economy, Education, Government Reform, State Government. Bookmark the permalink.