Posted on February 14, 2022 by Stephen D. Haner
Share this article on: 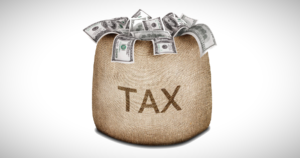 Virginia government is flooded with cash, tax revenues far in excess of what is needed to maintain its current level of services and a fair reserve.  Key votes have now been taken and the House of Delegates is poised to return much of the excess money back to taxpayers.  The Senate of Virginia wants to keep the money and continue growing government ever larger.

Governor Glenn Youngkin (R) campaigned on and has introduced a series of tax reductions, most (but not all) of which will likely receive approval by the full House by today or tomorrow.  Some of them (but not all) have received bipartisan support during their consideration in committee.

But the Senate Finance and Appropriations Committee, meeting late Thursday while an earlier Jefferson Policy Journal update on this topic was being written, is sticking with the minor tax cuts/more spending approach proposed by outgoing Governor Ralph Northam (D).  Some committee Republicans joined in voting against Youngkin’s proposals.

That means that when the two bodies consider their amendments to the state budget week after next, the Senate version will contain billions of dollars in additional spending and its members will assert that any failure to approve every dollar is harmful to the Commonwealth.  They will claim that the House budget, bound to also include record spending, is unfair compared to theirs.

The amazing financial surpluses already seen last year and expected for the next two result from the economic juicing of consumer spending by COVID-related relief programs, and the (usually unmentioned) long list of tax increases imposed under Northam.  This unique opportunity to cut taxes, improve cash reserves and still grow the state budget will not be permanent.

Where are the key points of difference between the chambers?  The House of Delegates is poised to double the standard deduction most Virginia taxpayers claim on their income tax, from $9,000 to $18,000 for a couple filing jointly.  That saves joint filers up to $518 per year and will reduce taxes about $2.1 billion in the next two years. It saves about $900 million per year after that.

The Senate, on the other hand, sent its version of the standard deduction bill to be studied, part of a promised comprehensive tax reform study.  Many of the same senators made the same promise just three years ago, claiming they would look at tax reform in response to the federal Tax Cuts and Jobs Act. It never happened.  Remember the Taxpayer Relief Fund? It got spent.

The Senate’s proposed budget to be revealed next weekend will likely spend that additional $2.1 billion on very popular items, supported by large interest groups willing to fight to keep it.  Forgotten will be the interest group called “taxpayers.”

It will be the same on the Governor’s proposal to remove the sales and use tax from the purchase of groceries and necessary personal hygiene products.  The sticking point there has been that the tax is also imposed and collected by local governments, dedicated to schools.  The House is poised to fully remove the 2.5% tax but replace the lost local revenue out of general sales tax pot.

The Senate is moving to repeal only the 1.5% state portion of the tax and would leave the local 1% tax in place.  It’s bill delays implementation until 2023.  The change gives the Senate budgeteers another $700 million to spend over the next two years, widening the gap with the coming House budget.

The third major point of difference involves Youngkin’s campaign pledge to suspend for one year part of the motor fuel tax increases imposed under Northam.  The House is about to pass a bill to accomplish that, which reduces transportation funding about $380 million over two years, with a lingering impact into future years.  The Senate committee simply killed that bill outright, no amendments, no study.

Any or all of those outcomes may change.  They are just the position of the parties at halftime, with the annual negotiations between the House and Senate following.  Assuming the General Assembly agrees on a compromise tax and budget package by the session deadline of March 12, Governor Youngkin gets one more chance to offer amendments at the reconvened session in April.

One proposal that continues to advance with unanimous bipartisan support creates a subtraction for military retiree pay, although it no longer would go into effect for this year.  Beginning in 2023, the subtraction is created at $20,000 and then grows to $40,000 in future years.

There have also been outright losses for the Governor, although they too are issues that could be revived later in negotiations.

The House Finance Committee had endorsed Youngkin’s promised tax credit for small businesses, basically a one-time exclusion for $250,000 in taxable income. But it was not on the list of tax proposals that emerged from House Appropriations late Friday to advance to the floor today.  The Senate committee had already voted to send it to that promised study commission.

That was something sought for small business taxpayers.  The other defeat involved mostly larger business taxpayers, those that received federal Payroll Protection Program grants for 2020 in excess of $100,000.  Youngkin sought to give them a retroactive deduction of up to $1 million but sought to do it in the annual bill creating conformity to federal tax code.  That bill needs to pass as an emergency measure with a four-fifths vote, meaning it would need Democratic votes.  It was getting none until the retroactive provision was dropped.

The 2019 General Assembly was another fleeting moment when real tax reform was possible, as the state saw a surge of revenue on the horizon created by conforming to the federal tax changes.  Instead legislators approved a one-time cash rebate, an election year sop, and a minor change in the standard deduction.  A repeat of that outcome remains very possible.

The Thomas Jefferson Institute has long advocated for doubling the standard deduction.  This year is the time to finally do it, but it won’t be done if legislators don’t hear from their constituents.  The time to hit the phones and emails is now.

Stephen D. Haner is Senior Fellow for State and Local Tax Policy at the Thomas Jefferson Institute for Public Policy. He may be reached at steve@thomasjeffersoninst.org.
View all posts by Stephen D. Haner →
This entry was posted in Economy, State Government, Taxes and tagged Glenn Youngkin. Bookmark the permalink.