Posted on December 22, 2022 by Stephen D. Haner
Share this article on:

The set of Virginia tax changes Governor Glenn Youngkin (R) has baked into his proposed 2023 budget amendments is far more extensive and involves substantially more tax relief than the descriptions he offered in his December 15 presentation.

“Baked into” is the correct phrase because his actual proposals can only be found in the budget document itself. None of them are introduced as bills yet, but the text can be found in a series of Code of Virginia amendments starting on page 713 of the printed budget bill under “Additional Enactments.” You will not find them in the on-line version most people see, or even the heading Additional Enactments. You have to call up the full PDF document. 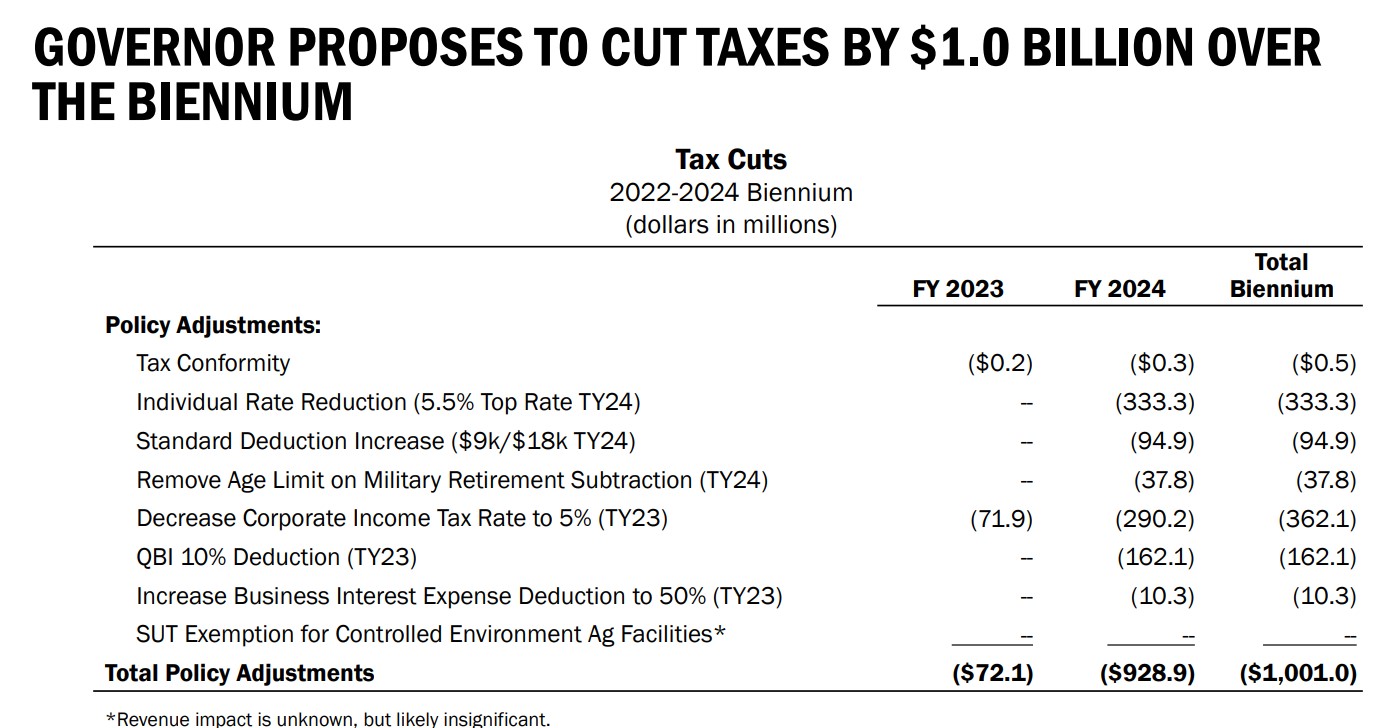 The 50 pages of dense text also include apparent changes to Virginia’s marijuana laws and the rules dealing with skill games. It is 50 pages of “legislating in the budget” on steroids, continuing and building on a trend many legislative process purists decry. In fairness, Youngkin didn’t start this. Nor is he fixing it.

In his presentation, Youngkin focused on two major tax proposals. He wants to cut the corporation income tax by 16%, from a headline tax rate of 6% to 5%. He wants to cut the top income tax rate for individuals from 5.75% to 5.5%. Since that top rate kicks in at $17,000 of taxable income, quite a few middle income households will benefit from that. How much they benefit I discuss below. (Hint, not much.)

Youngkin pegged it at $1 billion in tax relief, but that is just for the remainder of this two year budget cycle, ending July of 2024. The foregone revenue rises to $2.9 billion in the next biennium cycle, and $3.1 billion in the following, Fiscal Year 2027 and 2028 cycle. Those numbers were included in Secretary of Finance Stephen Cummings presentation from the same day. It totals $7 billion over six years, back loaded. If combined with last year’s changes, Virginia businesses and individuals will enjoy significant tax cuts.

What is included in the new batch other than the two income tax rate changes?

For individuals, Youngkin wants to increase the standard deduction another $1,000 per individual or $2,000 on a joint return. That achieves the 2021 campaign promise of doubling the standard deduction Virginia has offered for the past several years, only partially met last year. For a married couple that saves another $115 in tax (but only $110 if the top rate drops).

Cummings’s proffered explanatory table “scores” this at $37 million of revenue lost (or taxes reduced). That is ignoring the out years when the full $40,000 subtraction kicks in immediately upon retirement from the military at any age. The foregone state revenue on $40,000 at the top tax rate is $2,300 ($2,200 at 5.5%). A full fiscal impact analysis should be produced at some point in the coming session.

Measured by revenue impact on the state treasury, reducing the top individual tax rate to 5.5% is the largest proposal, putting about a third of a billion dollars back in individual pockets each year. But that is divided among millions of taxpayers. For someone with $50,000 of taxable income, it saves $125. On income of $1 million it saves $2,500. That will be a hard sell.

And while comments were made last week about tax relief being tied to future revenue growth targets, which if missed leave the tax rules unchanged, it appears that only applies to the individual tax rate cut. Most of the other proposals have no contingencies attached in the budget language. Another Cummings slide confirms that.

On business taxes, Youngkin’s two major proposals balance nicely. There is his cut in the corporate tax rate to 5% for businesses organized as C corporations. But for sole proprietors and partnerships, business income ultimately taxed under individual tax rules and rates, he proposes to piggyback on a popular federal small business tax provision allowing them to subtract 20% of their business net income.

That qualified business income or QBI deduction was created in the 2017 Tax Cuts and Jobs Act. On federal returns it is applied after the calculation of adjusted gross income (AGI). Since federal AGI is the starting point for state taxes, there is no similar QBI deduction recognized in Virginia.

Youngkin proposes to allow it in Virginia, but at 10% rather than 20%. According to a legislator who has looked, no other state with an income tax has conformed with the federal QBI. Virginia could be the first and it could be very attractive for small businesses and attract start-ups. And remember, if the top rate is cut to 5.5% for individuals, that also lowers taxes on Schedule C and other forms of business income reported on personal returns.

Attracting more business investment is also the justification for reducing the corporate income tax to 5%, which Youngkin ultimately wants to make 4%. North Carolina has slashed its rates and shows stronger economic growth than Virginia.

In the wake of passage of the 2017 federal tax bill, some legislators proposed similar corporate tax rate cuts. That is what the feds had done, cut the corporate tax rate. The state bills hit a wall in 2019, however, with the senior legislators reporting that the business community itself was apathetic. Nobody was saluting that flag but the patrons and us at the Thomas Jefferson Institute for Public Policy. Our proposals on the standard deduction got more traction (and still do).

The bills also got no support from then-Governor Ralph Northam (D). Youngkin presumably will push the idea and line up major business endorsements and some economic analysis to bolster his argument. He also built his budget on the assumption this and all his other ideas pass, removing the usual whining about having to “cut” the budget to “pay” for lower taxes.

Virginia is enjoying a bonanza of revenue growth. The $3.6 billion in unallocated revenue legislators have to work with is based on very conservative estimates that assume a period of recession, which might not materialize. Even with the tax cuts Virginia will be sitting on huge and growing cash reserves.

Yet the battle on all these proposals (except maybe on the third rail of military retirement pay) will be fierce. Government always wants more.

Stephen D. Haner is Senior Fellow for State and Local Tax Policy at the Thomas Jefferson Institute for Public Policy. He may be reached at [email protected]
View all posts by Stephen D. Haner →
This entry was posted in Government Reform, Taxes. Bookmark the permalink.