Centuries of Future Energy Sitting in a Can 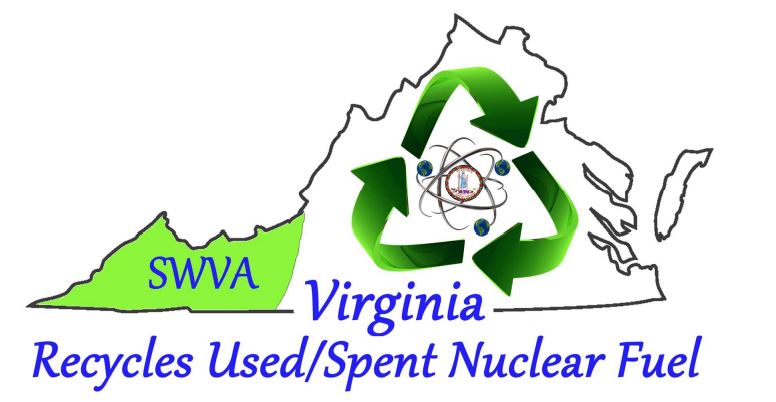 Less obvious is that a serious nuclear renaissance in this country could be sparked and sustained by recycling used nuclear fuel.  It is not “waste” or “spent,” but only “slightly used.” The fuel rods removed from the North Anna and Surry reactors in Virginia still have 97 percent of the energy potential they had going into the reactors.  We know how to extract it and make new fuel.

Yet the fuel recycling concept was not even referenced in a new Virginia-specific nuclear strategic plan, despite the massive energy and financial value languishing in fuel assemblies  sitting in giant casks at the two power plants.  About the bravest, most forward looking-idea in the 15 pages of fluff (here) is to support extended licenses for those four old-tech reactors, which provide about 30 percent of Virginia’s electricity.

By not mentioning recycling, one need not address the even more bold idea of doing it here in Virginia, building a plant that could provide new nuclear fuel to the entire country, ending the need for dependence on foreign suppliers.

The United States has 90,000 tons of used commercial nuclear fuel and 600,000 tons of depleted uranium. Combined, those are the equivalent in energy to 4.5 trillion barrels of oil, four times the world’s proven reserves.  Used by itself in a fleet of next generation reactors or coupled with all the wind and solar your heart desires, our electric grid becomes carbon free, stable, and reliable for the foreseeable future.

The first governor and first state to jump at this may be able to tap into the $40 billion in cash sitting unspent in a federal fund, built with ratepayer fees, intended for dealing with used commercial nuclear fuel.  Decades of effort have found no politically viable solution and the money accumulates.  Forget disposal and move the focus to recycling.

Virginia is already a major nuclear state, although most Virginians don’t know it.  The nuclear fuel used by the Navy is assembled here in Virginia.  It is installed in new submarines, new aircraft carriers and carriers being overhauled in Newport News.  Nuclear ships have been docked at Norfolk Naval Base for decades now, their reactors never fully turned off.

Will Virginia have the vision or courage to move on this, or will some other state go first?

The pitch is being made to Virginia.  An advocacy group has formed and is growing and made its pitch to the Virginia Nuclear Energy Consortium about a year before it published that report, which then didn’t mention their idea.  They call themselves the Virginia Program Office for Recycling and Disposition of Used/Spent Nuclear Fuel. It is a high falutin’ name but it remains a fairly informal effort.

A former police officer, helicopter pilot and police boat operator who navigated the waters of Long Island sound and New York to perform rescue missions on 9-11, Tom Dolan of Charlottesville, is the Virginia connection.  His career advanced into radiation detection and terrorism counter measures. That brought him in contact with Steve Curtis, a nuclear emergency response expert who spent his career in Nevada but now lives in Minnesota.  Others with the right technical backgrounds have gotten involved.

There are two main recognized methods for recycling the fuel into new fuel and other products, but one objection to the most common (used by France and others) is the amount of water it requires. So, Dolan and Curtis are pointing to a process recently planned out at the Argonne National Laboratory in Illinois known as pyroprocessing, using electroplating without the water demand. This is hardly secret stuff. You can watch this for an overview.

With that process, 100 tons of used fuel produces 93 tons of uranium pure enough for fuel use, 2 tons of metal fuel ingots for use in the new fast reactor designs, and five tons of fission byproducts with no current use that need safe storage. But after pyroprocessing the highly radioactive byproducts need only be stored for a few hundred years rather than a few hundred thousand years, and in the Argonne video they are encapsulated in glass.

That’s the first 100 tons. As mentioned above, multiply that by 900 for the total potential.

Why is the United States sitting on all this energy and pretending it doesn’t exist? The public’s fear and misunderstanding about nuclear energy is deep, with many happy to feed it. The industry’s incredible safety record, especially compared to coal, is unknown. Too well known are recent stalled or failed U.S. commercial nuclear plant construction efforts in Georgia and South Carolina. China, on the other hand, has no such problem and just opened a new plant.

Curtis and Dolan have pitched Southwest Virginia, with its proximity to the nuclear facilities in Tennessee, or Louisa County next to North Anna as possible Virginia locations for such a plant. But they are also in other states regularly seeking the needed capital and courage. One day they may find both.

If the courage and capital exist somewhere in Virginia, the opportunity remains wide open.

Stephen D. Haner is Senior Fellow for State and Local Tax Policy at the Thomas Jefferson Institute for Public Policy. He may be reached at [email protected]
View all posts by Stephen D. Haner →
This entry was posted in Energy, Environment. Bookmark the permalink.

3 Responses to Centuries of Future Energy Sitting in a Can