Posted on March 4, 2022 by Barbara Hollingsworth
Share this article on: 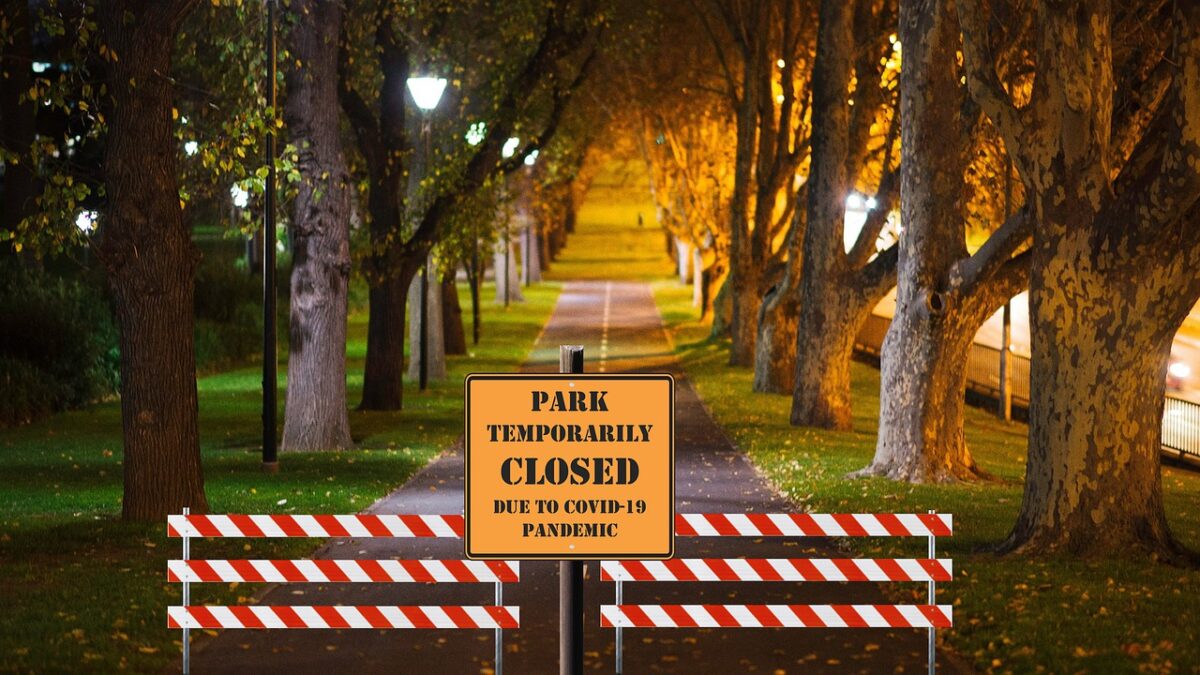 Should the governor of Virginia have the power to unilaterally declare an open-ended state of emergency that indefinitely restricts Virginians’ civil and constitutional rights without a recorded vote by the General Assembly?

The COVID-19 pandemic lockdowns raised this serious question. But so far, nobody has answered it definitively.

One of the few public officials to even question the limits of a governor’s emergency powers was state Sen. Chap Petersen, D-Fairfax, who in 2020 filed a lawsuit claiming that former Gov. Ralph Northam’s Executive Order 72 – which imposed draconian restrictions on some but not all business establishments in Virginia in an attempt to reduce transmission of the coronavirus – exceeded his authority because Northam did not seek or obtain consent from the state legislature.

But the Supreme Court of Virginia evaded the question by throwing out the lawsuit over plaintiffs’ “lack of standing” and “failure to demonstrate a relevant injury,” and the General Assembly’s Democratic majority at the time apparently didn’t want to answer it either. That same year, legislators also killed a bill that would have required the state Board of Health to not only approve such emergency measures within 30 days, but also vote to renew them every month thereafter until the proximate cause of the emergency had passed.

If Democrats did not want to undermine their own governor by challenging his authority during a pandemic, they seem to have second thoughts now that Northam is out of office and there’s a new Republican governor and a new GOP majority in the House undoing many of Northam’s COVID-19 policies – such as mask mandates for students.

Whatever side of the mask issue you’re on, it’s unsettling to think that one person in the commonwealth can make such a decision for everybody else. So this legislative session might be the best and perhaps only time legislators of both parties agree to clearly define the limits of any future governor’s power during a declared “state of emergency.”

A state of emergency is defined by Section 44 of the Virginia Code as “the condition declared by the Governor when in his judgment the threat or actual occurrence of an emergency or a disaster in any part of the Commonwealth is of sufficient severity and magnitude to warrant disaster assistance by the Commonwealth to supplement the efforts and available resources of the several localities and relief organizations in preventing or alleviating the damage, loss, hardship, or suffering threatened or caused thereby and is so declared by him.”

Disasters in the past warranting state of emergency declarations have largely been things like hurricanes, tornadoes, floods, or other natural phenomena that caused loss of life and widespread property damage. They were typically limited in duration. The COVID lockdowns were different. They were originally announced by Northam as a way to prevent what public health experts predicted would be an inundation of critically ill patients that would overwhelm Virginia hospitals.

Despite these claims and the governor’s own medical training, those predictions never materialized.  Yet his near-dictatorial mandates were not lifted even when it became apparent that certain demographics, such as the elderly and those with co-morbidities, accounted for most of the deaths. Northam moved the goalposts instead.

By definition, an “emergency” is a temporary event of sufficient magnitude requiring immediate action. It is important that the chief executive of the commonwealth be able to act swiftly and decisively to protect residents and property from serious harm. But how long can an emergency last before it ceases being an emergency? And how long can a governor who has unilaterally declared a state of emergency exercise such powers without the consent of the legislature?

The COVID-19 pandemic illustrates why the legislature must step in to set some guardrails for future governors.

On March 23, 2020 Gov. Northam issued Executive Order 53, which ordered the statewide closure of all K-12 schools, certain “non-essential businesses,” and “all gatherings of 10 or more people.”

“This is an unprecedented situation, and it requires unprecedented actions to protect public health and save lives,” Northam said at the time.  And because the governor was also a physician, most Virginians accepted the fact that their liberty would be temporarily curtailed in this statewide effort to “stop the spread of COVID-19.” But nobody expected it to drag on for more than two years, or that people with an extremely low risk of dying from the virus would be treated the same as high-risk individuals.

Even back then, contradictions in the governor’s lockdown plan were evident. For example, the Northam administration defined state-owned liquor stores as “essential” – while closing bars and restaurants that also sold alcohol. Big-box retail stores were allowed to remain open for business, but smaller retail establishments were not – as if the virus knew the difference.

Northam even went so far as to impose a curfew between the hours of midnight and 5 a.m. with no scientific evidence then or now that COVID-19 was being transmitted in the middle of the night.

Virginians were still leaving their homes and mingling with other people – although they were supposedly staying six feet apart. But even targeted lockdowns, social distancing, mandated mask-wearing and the copious use of disinfectant and hand sanitizers turned out to be insufficient to stop this contagious respiratory virus from spreading to every county in the commonwealth.

In fact, a meta-analysis of 34 worldwide “difference-in-difference” studies of excess deaths caused by COVID-19 published in January 2022 (“Effects of Lockdowns on Covid-19 Mortality”) by the Johns Hopkins Institute for Applied Economics, Global Health and the Study of Business Enterprise found that government restrictions had “little to no public health effects,” despite imposing “enormous economic and social costs where they have been adopted.”

“Indeed, according to stringency index studies, lockdowns in Europe and the United States reduced only COVID-19 mortality by 0.2% on average,” the meta-analysis found, concluding that “lockdown policies are ill-founded and should be rejected as a pandemic policy instrument.”

Northam’s one-size-fits-all mandates caused enormous social, economic and even physical harm as tens of thousands of Virginians lost their jobs and businesses. Many others were afraid to seek medical care for serious conditions such as heart disease and cancer or succumbed to drugs used to self-medicate their losses.

What should alarm Virginians is the unbridled power that the commonwealth’s chief executive has to impose such policies. Under state law, a sitting governor only has to send copies of any executive order, rule or regulation made under a state of emergency to members of the legislature. And while a governor should have the authority to react quickly in an emergency, there must be some clear statutory limits on this power.

For example, on January 20, 2022 Gov. Glenn Youngkin signed Executive Order 13, which rescinds Northam’s Executive Order 3 and delegates Youngkin’s emergency powers to his unelected chief of staff or other political appointees if he is incapacitated or unable to perform his duties after a 24-hour period.

Section 2.2-104 of the Virginia Code gives the governor sweeping power to delegate in such cases. But does this mean that the governor’s chief of staff can dictate lockdowns, restrict Virginians’ freedom of movement, right to worship or earn a living by issuing draconian emergency measures for an indefinite period of time without the consent of the General Assembly?

Some states keep their governors on a much tighter leash, even during a declared state of emergency. According to the National Conference of State Legislators, some states set specific time limits for emergency executive orders: 15 days in Kansas and South Carolina; 21 days in Pennsylvania; 28 days in Michigan; 30 days in Alaska, California, Minnesota, Utah and Washington; and 60 days in Florida and Wisconsin.

NCLS notes that the legislatures of 34 states plus Puerto Rico currently have bills pending to limit the extraordinary emergency powers their governors invoked during the COVID-19 pandemic. In Virginia, several such bills have already been voted down.

H.B. 158, patroned by Del. Kathy Byron, R-Lynchburg, which limits emergency orders to 30 days and requires the General Assembly to approve any extensions up to 90 days, unanimously passed the House 99-0 on February 14 and was sent to the Senate Rules Committee.

S.B. 4, patroned by Sen. David Sutterlein, R-Roanoke, is similar to Byron’s bill, but extends the initial time limit of emergency orders to 45 days. It passed the Senate on a bipartisan 29-11 vote on February 15 and was sent to the House Rules Committee.

Both of these bills could be killed in committee, but there is obviously some agreement on both sides of the aisle this year to limit a future governor from misusing these vast emergency powers. And the 15-day difference between them should not require much compromise.

Although a statutory limit on the governor’s emergency powers would be better than nothing, a proposed constitutional amendment (SJR 36) that would make such limits part of the Virginia Constitution and therefore more difficult to repeal by a future legislature, would be ideal.

Patroned by Sen. Stephen Newman, R-Roanoke, it would require the governor to call a special session whenever a state of emergency was declared for longer than 90 days.

But senators punted on this one, voting 15-0 to send this proposed constitutional amendment to the 2023 Privileges and Elections Committee, presumably to die a slow death there. So while the General Assembly seems ready to set some limits on the governor’s emergency powers this session, a more permanent solution will have to wait.

There’s still time to curb the governor’s vast emergency powers, but the clock is ticking. The last day for committee action is Monday, March 7th, and the 2022 legislative session adjourns the following Saturday on March 12th.

Voters will soon know whether their state legislators were actually serious about checking the power of the executive branch in this matter – or not.

Barbara Hollingsworth is Visiting Fellow with the Thomas Jefferson Institute for Public Policy. She is the former editorial page editor of the Fredericksburg Free Lance-Star, the Fairfax, Alexandria, and Arlington Journals, and the local opinion editor of the Washington Examiner
View all posts by Barbara Hollingsworth →
This entry was posted in Government Reform. Bookmark the permalink.