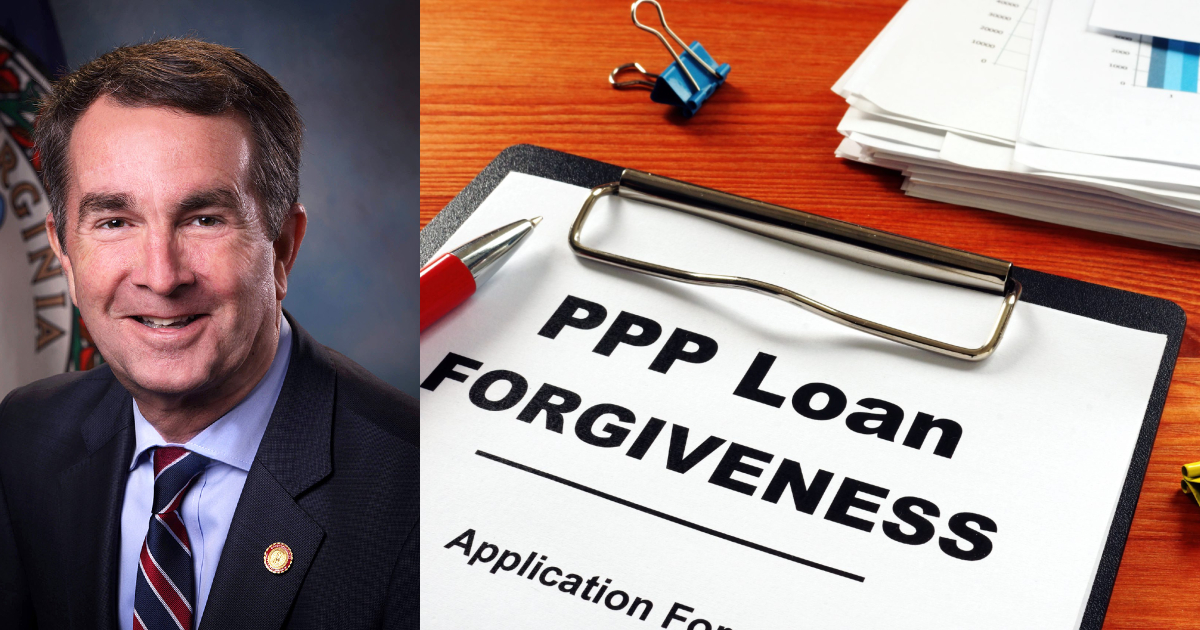 A week ago, Governor Ralph Northam’s Administration was adamant that it would be unfair, in fact a double tax benefit, to allow Virginia employers with forgiven Paycheck Protection Plan loans to also deduct any expenses used to qualify for forgiveness.

This week, the position changed.  Maybe it would make sense to allow it for some employers. Perhaps those employers could keep the first $100,000 from the grants free from tax.  What was a firm assertion of fair tax policy is now a typical legislative horse trade, with smaller businesses considered “deserving” and larger businesses not.

Northam and his secretary of finance, Aubrey Layne, built the introduced state budget on a key assumption:  Any Virginia employer that received some of the $12 billion in PPP money which flowed into Virginia, and had that loan forgiven, would be denied a tax deduction on the expenses which qualified it for forgiveness.  (Mostly employers qualified by keeping employees on the job, so the deduction would be payroll dollars that supported them and their families.)

Under traditional IRS rules, which the IRS confirmed in the case of the PPP program last year, that is how other business loans are treated if the loan amount is forgiven.  Applying that IRS interpretation added up to $500 million in projected individual and corporate income tax revenue for fiscal years 2021 and 2022.

But then Congress overruled the IRS.  Congress in December made it clear the PPP loans are not taxable income and the expenses that justified them remain deductible expenses. That effectively made PPP tax free at the federal level.  Governor Northam is asking the legislators to stick by the old approach and impose state tax on the PPP proceeds that preserved jobs in the 2020 recession.

Two bills, one in the House and one in the Senate, seek to de-conform Virginia from several new federal tax provisions adopted in response to the COVID-19 pandemic.  Most are business related, and most have not proven controversial.  But the attempt to prevent deduction of the payroll and other expenses which turned the PPP loans into grants brought both bills to a halt.

Layne was back in front of the Senate Finance and Appropriations Committee Wednesday with more information and the outlines of a compromise, but without a specific recommendation.  Six members of that committee will meet and decide whether to allow none of those deductions, all of them, or some portion.  In other words, whether to tax all, none, or part of those PPP grants.

Estimates were provided on the fiscal impact to the state of various caps that might be set on the deductions — $10,000, $25,000, $50,000 or $100,000.  (“Fiscal impact to the state” also translates into “more money left with taxpayers.”) Some larger employers – heavily in Northern Virginia – received PPP loans in the millions, but the statewide average amount was $107,000, Layne reported.

Committee members in both parties warmed to the idea of allowing partial deductions with a cap. “For the most part I agree with where you are going,” said senior Republican Emmett Hanger of Augusta.  Some members, however, discussed trying to focus the deductions only on struggling companies.

This is not an issue for companies that will show a loss on their 2020 tax returns.  In fact – an inconvenient fact – disallowing these deductions will push some companies from tax-free losses into taxable gains.

Of the 108,000 loans to taxed entities, only 21,500 were for amounts above $100,000. That means a cutoff of $100,000 for deductions of the PPP-tied expenses covers 80 percent of recipients.  It protects more of the smaller unincorporated operations, and fewer large corporations.  Layne didn’t circle that fact in red or put a gold star on the chart, but the politicians will home in on that line immediately.

The $100,000 deduction cap provides political cover.  Eight in ten of the employers would get full deductions.  Since the larger loans were often much larger, the state would still get most of the PPP tax receipts baked into the Governor’s introduced budget.  This approach may emerge next week.

As he had in a previous meeting, Layne argued Wednesday that the PPP recipients do not deserve better treatment than those employers who did not seek it or didn’t qualify.  He mentioned that those were disproportionately small and minority firms, as if higher taxes on the firms that did get PPP removes that problem.

Many of those employers instead received grants from Rebuild VA, which the state set up.  Rebuild VA was about one percent of the size of the PPP program, $120 million instead of $12 billion, and it was the Northam Administration’s plan to impose the same tax hit on them – deny to them any deduction for the expenses they used to qualify for the grants.  That changed, too.

“Threshold, timing, and definition of qualifying taxpayers (for Rebuild VA) should be consistent with the deduction for PPP loan recipients, if such tax benefits are adopted,” Layne wrote in his presentation slides.   That is correct.  Taxing those grants – taking a six-percent kickback on that job rescue money – would be wrong.  The General Assembly should fix that, too.

Stephen D. Haner is Senior Fellow for State and Local Tax Policy at the Thomas Jefferson Institute for Public Policy.  He may be reached at steve@thomasjeffersoninst.org.

Stephen D. Haner is Senior Fellow for State and Local Tax Policy at the Thomas Jefferson Institute for Public Policy. He may be reached at steve@thomasjeffersoninst.org.
View all posts by Stephen D. Haner →
This entry was posted in Economic Development, Economy, State Government and tagged northam, ppp. Bookmark the permalink.