Posted on December 14, 2021 by Stephen D. Haner
Share this article on: 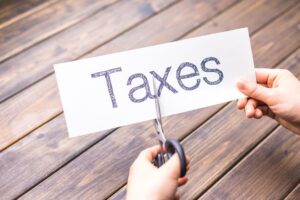 Outgoing Democratic Governor Ralph Northam announced Tuesday that his final introduced budget will include $2.1 billion in lower taxes, created by a one-time rebate to all taxpayers, a one-time tax break for certain businesses, and two small changes with long term benefits.

Incoming Republican Governor Glenn Youngkin, on the other hand, has proposed a similar one-time tax rebate to all taxpayers. But his other tax proposals are far broader and deeper than Northam’s and will probably require some trimming in parts of the introduced budget coming from Northam. The actual budget proposal is released later this week.

Youngkin had asked Northam to include tax reform in his package, and to his credit Northam did. It is the 2022 General Assembly which will make the big decisions on how and by how much taxes will go down, and for whom, but they now enjoy a $2.1 billion head start.

“We appreciate the Northam administration laying the foundation for these elements of the Day One game plan so that Gov.-elect Youngkin can hit the ground running on Jan. 15 to begin executing on his key campaign promises and finish the job.”

The admission from the outgoing governor that tax cuts are in order is gratifying. The message was very different during the campaign just completed. The Thomas Jefferson Institute spotlighted the state’s growing cash glut a year ago, continued to bird dog the issue, and has been the only advocacy group also pointing to the various tax increases under Governor Northam as the main cause of the surpluses.

Northam is still in denial on that point, crediting the $2.6 billion surplus revenue last year and the similar surpluses now projected into the future to “unprecedented economic strength.”

Northam’s proposals may have caught some allies off balance, as many liberal advocacy groups have been opposing the idea of any tax cuts as misguided or damaging to key governmental priorities.

Youngkin’s tax proposals are superior to those offered by Northam in several ways. They are more clearly targeted at ameliorating the various tax increases that created the surpluses. In particular, he has adopted the Jefferson Institute’s key proposal to greatly increase the standard deduction allowed to all taxpayers who don’t use itemized deductions when calculating income tax.

Northam proposes to lower the burden on them by enhancing the earned income tax credit (EITC.) That means the state will continue to extract withholding paycheck to paycheck, and then taxpayers use a bureaucratic process to get some back. It is far better to simply tax them less initially.

The real reason the EITC is the preferred tax “reform” for Democrats is it provides zero benefit to anybody above a modest income. The higher income taxes now imposed on middle and upper income taxpayers using the standard deduction remains in place for years to come. Youngkin’s proposal benefits far more Virginians.

Both Northam and Youngkin have now proposed one-time rebates, presumably to be paid sometime in 2022, similar to those sent out in 2019. Northam’s would be $250 for an individual and $500 for a married couple filing jointly. Youngkin’s is $50 higher per person. In neither case does such a payment constitute long-term tax reform, and the future surpluses are not reduced by the step.

Both Northam and Youngkin have proposed a change in the sales tax on groceries (unprepared foods), already taxed at the lower rate of 2.5%. Youngkin would eliminate it, while Northam would forgo the state’s 1.5% but retain the 1% tax which is shared with the local governments. Many local governments are also facing an embarrassment of tax riches thanks to inflated prices on goods and real estate but are expected to cry poverty to any proposal to trim that sales tax on groceries.

Youngkin, however, has also proposed a one-year hiatus on the most recent 5 cent per gallon increase in the gasoline and diesel taxes. That is missing from the Northam proposal, even though transportation tax revenues are also producing unexpected surpluses. Also ignored is Youngkin’s proposed income tax exclusion for military retiree pay.

On his part, Northam has proposed an end to the practice of making certain larger retailers pay their sales taxes a month earlier than the normal schedule. That was implemented years ago as a pure accounting gimmick, boosting revenue in one year at the expense of the next. Fixing the payment schedule has a one-time revenue impact but doesn’t really save the retailer anything. For Northam to pass that off as a tax break is disingenuous. (But he isn’t the first do so.)

The last time the state pulled that “accelerated sales tax” stunt and then reversed it, a member of the State Senate admitted in debate: “We have to fix this now so that we can do this again the next time we’re in a bind,” or something to that effect.

Stephen D. Haner is Senior Fellow for State and Local Tax Policy at the Thomas Jefferson Institute for Public Policy. He may be reached at steve@thomasjeffersoninst.org.
View all posts by Stephen D. Haner →
This entry was posted in State Government, Taxes and tagged Glenn Youngkin, ralph northam. Bookmark the permalink.