Posted on October 7, 2020 by Stephen D. Haner
Share this article on: 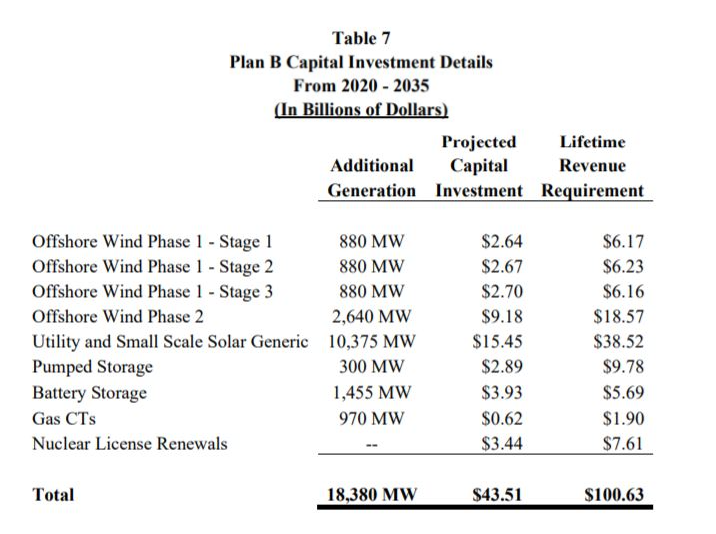 As sobering as they were, the initial estimates of how a green energy conversion will explode Dominion Energy Virginia rates have now been revised up. The State Corporation Commission staff now sees it costing an additional $800 per year for a residential customer to purchase 1,000 kWh per month by 2030, an increase of just under 60%.

The main drivers of the higher costs will be all the offshore wind and solar generation Dominion proposes to build, as outlined in its most recent integrated resource plan. That plan is now being reviewed by the SCC, and the staff filed its analysis late last week, summarized here on pages 4-5.

The separate cost analysis by Carol Myers of the SCC’s Division of Utility Accounting pushed up the utility-issued estimate by disputing assumptions the utility made. Staff disagrees with the utility projection that by 2030 less than half of its electricity will be used by residential customers. It is now about 55%. Should the portion shrink as Dominion projects, more of the project costs would be imposed on commercial users.

Myers reported it is also unrealistic to assume most residential households use 1,000 kWh per month, when the history show usage at or above 1,100 kWh.  Plugging that into the data would increase the projected cost to families even beyond $800. Myers’ testimony also shows huge increase in commercial (60%) and industrial (65%) power costs by 2030, even larger on a percentage basis than residential. For the state’s economy, they also matter.

Reading her testimony demonstrates how many variables are involved in these projections. Behind the “gotcha” headlines, it is clear these estimates could easily be too high or too low. Much but not all of the coming price increases can be blamed on the 2020 Virginia Clean Economy Act, which is dictating the massive wind, solar and storage investments. The General Assembly is also responsible for the vast majority of the other recent decisions driving up your future bills.

There is also no reason to assume that a General Assembly which has rewritten utility law several times in the past decade will not continue to do so going forward. Each integrated resource plan seems to survive as a useful document only until the next General Assembly session, if that long.

One of the major unanswered questions is whether the North Carolina regulatory authority will impose these capital costs on its citizens served by Dominion. If not, that will further increase the bill on Virginians.

The new analysis by the State Corporation Commission staff confirms that the green energy law passed by the General Assembly is indeed the “Clean Energy We Don’t Actually Need Act.” Dominion Energy Virginia will be collecting $100 billion from its customers to build far more electricity generation than we need, either to meet renewable energy goals or to simply meet demand.

Environmental opponents of the plan will seek to stop continued operation of the coal-fired Virginia Hybrid Energy Center in Southwest Virginia, which on an accounting basis is actually a money-losing operation with a net present value of negative $472 million by 2030.

Along with fossil fuel plants not being closed, Dominion proposes to add 970 megawatts of new natural gas generation by 2024, “to address what (Dominion) characterizes as probable system reliability issues resulting from the addition of significant renewable energy resources and the retirement of coal-fired facilities,” the staff wrote.

Like Gaul, your future Dominion bill increases are divided into three parts in Myers’ testimony, as her table above illustrates.

First, identified in the document as Plan A, are increased costs not directly tied to the 2018 or 2020 legislation. Those include the Assembly-approved plans to remove coal ash, to place hundreds of miles of residential tap lines underground, and various demand management programs where customer A pays customer B to use less power. Also included are the cost of gaining new 20-year operating licenses for Dominion’s four nuclear reactors.

The second tranche of higher costs are projects which were mandated in the 2018 Ratepayer Bill Transformation Act (also called the Grid Transformation Act). That includes a portion of the planned solar, a broadband program subsidized by ratepayers, even more demand management, and a planned pumped storage facility to provide 300 megawatts of backup to renewables.

Myers includes a table comparing the new generation sources, the amount of energy generated when they operate and their initial cost and all-in cost, including financing and profits over time. That’s how $45 million in capital costs translates into $100.6 million in customer payments.

The staff testimony and all the other documents in the IRP case may be found here. Below is the revised version of a chart used earlier. 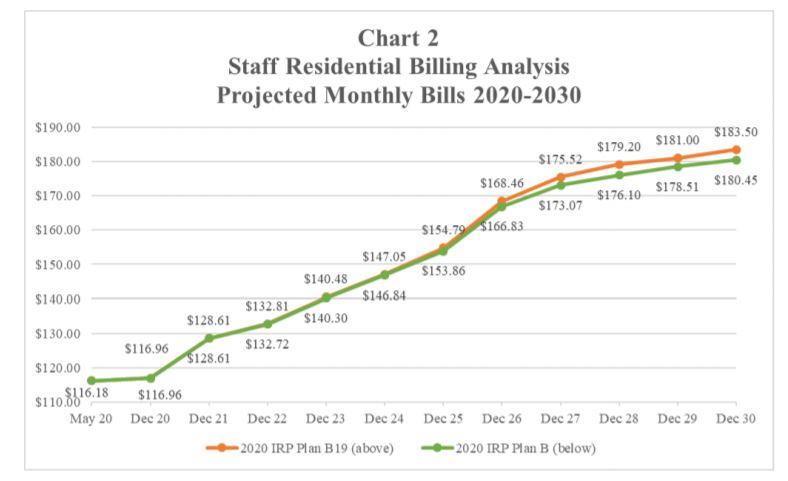