Posted on January 8, 2020 by Stephen D. Haner
Share this article on: 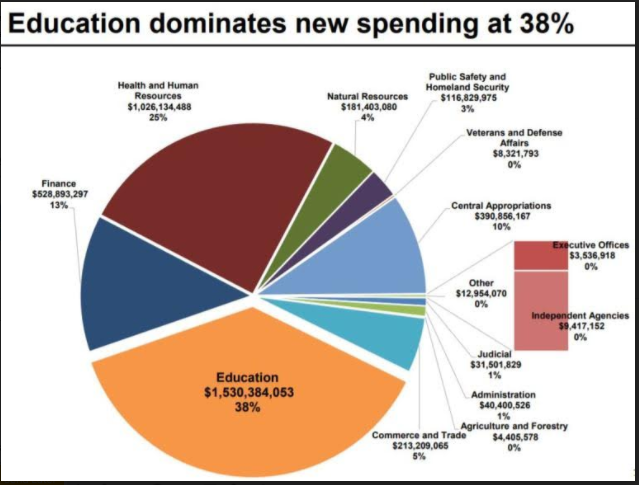 The new spending over the next two years by major category. This is for the smaller $48 billion general fund. No such pie chart was published by the Department of Planning and Budget for the combined $139 billion full budget.

The interesting thing is not how Virginia’s overall budget has grown 20% in just two years (seen that number reported anywhere else?) What’s interesting is how many interest groups are openly pushing to make it even larger. The $23 billion increase is not enough!
Just two years ago, in December 2017, Governor Terry McAuliffe dropped in his proposed budget for the budget cycle we are still in, Fiscal Years 2019 and 2020.  Before the 2019 General Assembly worked its magic, the baseline two-year total for spending he proposed was $116 billion.
Comparing an apple to an apple (which the political class discourages) the equivalent figure for the budget Governor Ralph Northam published last month is $139 billion, growth of $23 billion or 20%. That is the general fund and the non-general fund combined. It becomes more and more obvious that the non-general fund is the cart pulling this horse. At $90 billion over the next two years, it is almost double the proposed $48 billion general fund. Soon it will be more than double.
The proposed gasoline tax increase of four cents per year for three consecutive years is included in non-general funds. The continued explosion of university tuition charges is in the non-general fund. The undefined, “sum sufficient” hospital assessments behind the massive increase in Medicaid costs are non-general funds, as are the matching federal dollars they leverage. The days of putting the main focus on the smaller general fund with its direct taxes are over.
As noted, advocates for public education (call it K minus two to 12, since pre-K is expanding) want far more money from the state. The $1.2 billion spending increase the Governor has proposed is mainly focused on adjusting the base cost of existing programs for enrollment and inflation, plus a modest teacher raise. They want more for teacher salaries and other programs, the Full Monty from the Board of Education.  Expect additional spending amendments from human service advocates, including a coalition that now wants to expand dental benefits for Medicaid recipients.
The wish will become flesh with many of these later this week, when proposed amendments to the budget must be filed with the money committees. State employee groups, noting that neither year in the proposed budget includes raises for them, will be among the hardest to deny.  The $200 million slush fund the Governor left unspent for the Assembly to play with will not be sufficient.
Some key talking points:
To start with something positive, the Governor held discipline and is significantly increasing the state’s reserves to almost $2 billion. Thank goodness Virginia has that beloved AAA credit rating and no governor or finance secretary wants to be remembered for losing it. We go to AA+ and nothing will hold them back.
By the second year of the budget Virginia achieves so-called “structural balance,” when revenues and expenditures match without relying on reserves or by moving money between years. That will hold until the next economic hiccough or full recession, unless the General Assembly now blows it.
Tax increases have funded this explosive growth, some open and some hidden. The hidden tax increase is the added state revenue created by conforming to all the tight new restrictions on deductions created by the federal Tax Cuts and Jobs Act, while keeping Virginia’s tax rates the same. This budget abandons the legislative requirement to track and hold that extra money aside for future tax relief, something discussed here just a few weeks ago.
The taxpayer relief fund was enshrined in law as well as in the budget, but a budget bill language provision directly repeals the law, too. “17. That the fifth enactment of Chapter 17 of the Acts of Assembly of 2019 and the fifth enactment of Chapter 18 of the Acts of Assembly of 2019 are repealed.”  That’s clear, right?

Over two years the state will reap hundreds of millions from individual and business taxpayers paying more than they would have on the same income two years ago. But President Trump’s tax cuts also stimulated the economy, so incomes are up as well – a double windfall for the state from him, and one impossible to track and calculate. Politicians love tax hikes you cannot see.

The tax hikes you can see are not that clear, either. The two hospital taxes created to fund the Medicaid expansion and the hike in Medicaid provider payments are intentionally hard to track. Nowhere in any of the presentations made December 17, from the Governor, the Secretary of Finance, or the Director of Planning and Budget, will you find the dollar value of those hospital taxes mentioned.

In prior years there has been a table spelling out the specifics on all tax rule changes, positive and negative. That is lacking this year, a disappointing retreat from openness. But there is a $250 million over two years estimate in one of the slide sets on the proposed tobacco and vaping taxes, with another reference to $61 million from the first stage of the gas tax increase. New taxes on certain gambling machines (“games of skill”) may produce another $125 million over two years.
The non-general fund tax hikes are really fueling higher general fund spending. For example, the new tax on those now-unlicensed games in bars will transfer to school spending. The gas tax revenue will displace general funds that were being used for transportation. This is more reason to focus on the full budget and end the distinction between general and non-general funds.
>Stand by for updates. There is plenty in this budget yet to be explored in detail, and if the pattern holds both the House and Senate money committees will publish detailed analyses soon. Maybe one of them will put all the tax changes on one table or chart and save me an exercise in Excel.
This commentary originally appeared in the January 7 edition of the online Bacon’s Rebellion.