The War on Asians, the Death of Meritocracy, and the Assault on STEM

Posted on November 5, 2020 by Asra Q. Nomani
Share this article on: 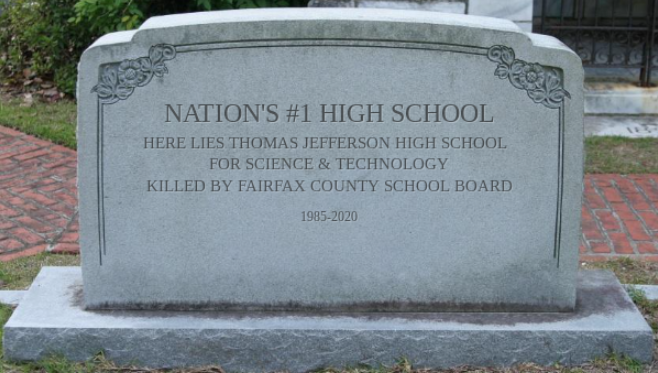 FAIRFAX COUNTY, Va. — This past weekend (this article originally published October 20), about 100 families, students, alumni and community members Thomas Jefferson High School for Science and Technology stood on the grassy lawn in front of the school and held a symbolic memorial service for the nation’s No. 1 high school.

“Remember the glory of TJ,” said Yuyan Zhou, a Chinese-American alumni mother, as friends stood around her with trophies and medals that symbolized many of the shining moments from the school’s history. “How many of you know that a high school can launch a rocket into space?” she asked, holding a medal around her neck and saying, “I have the medal…Help us preserve that spirit and keep TJ alive!”

They (and I, as a TJ parent) were also grieving something else: a war on Asian Americans by educrats and activists pushing the controversial ideology of critical race theory that is sowing racial discord and division in K-12 school districts around the country. Today, parents and community members launched a Change.org petition to have Fairfax County Superintendent Scott Brabrand and TJ Principal Ann Bonitatibus lose their jobs, following months of behind-the-scenes activities by the two officials supporting the anti-Asian attack on the school’s students and families. Yesterday evening, the Chinese American Parents Association of Fairfax County sent a three-page letter to the Fairfax County Board of Education, opposing the lack of “respect” that Asian Americans have been facing in the debate over TJ admissions.

Since the school’s birth in 1985 as a “Governor’s School,” specializing in science, technology, engineering and math, it had taken the community 35 years to build the school’s reputation as a premier high school. But it took the 12 Democratic members of the Fairfax County School Board only 12 minutes and 11 seconds in the dark of the night on Tuesday, October 6, during an online meeting in the middle of pandemic, to kill the school, eliminating its race-blind, merit-based admissions test.

Ideologues in the dangerous philosophy of critical race theory had just scored a major victory in their war on Asian-Americans. Like bigots and racists in the 20th century targeted Jewish students who secured admission to America’s Ivy League schools, activists are putting a hit on Asian-Americans who defy their thesis that “systemic racism” and “white supremacy” so oppress minorities that they cannot advance.

This war on Asians is spreading nationally, with schools with large Asian student populations under fire to be decimated. In California, the San Francisco Unified School District is set to vote tonight to replace the merit admissions process to Lowell High School with a lottery. As I write, educrats there a ramming a lottery through a Zoom call, attempting to shame the school’s Asian American parents and students and others opposed to the lottery and blasting the racist “toxic culture” at the school, where Asian American students are 61 percent of the student body — rhetoric identical to the anti-Asian campaign in Virginia. In New York City, parents are facing a campaign to remove the academic test to the city’s selective STEM schools, including Stuyvesant High School and the Bronx High School of Science.

In Massachusetts on Sunday, as families in northern Virginia held their memorial service for TJ, parents, students and community members in the Boston Public Schools system held a protest to oppose a plan proposed last week for a “racial equity planning tool” to eliminate the academic exam to the school district’s three top schools, including the O’Bryant School of Mathematics and Science. Like educarats in San Francisco, northern Virginia and New York City, Boston school officials argue that STEM school’s racial demographics “don’t mirror” the district’s demographics. They note “Asian and white students” are “meeting or exceeding expectations at higher rates” than Black and Hispanic students.

This summer, leaders at the Illinois Math and Science Academy, the state’s No. 1 STEM school, circulated a PowerPoint that reprinted the claim, “Math was never neutral.” They cited critical race theory and the “implicit bias in STEM,” to allege that “white male identity” dominates “what it means to be a scientist,” that “feminine and ethnic identities are not valued” and that mathematics should be called “mathematx,” to “signify a humanizing re-imagination of mathematics free from dominance of Eurocentric and White culture.

The rhetoric nationwide mirrors the language in Fairfax County, Va., where a small but vocal group of radical TJ alumni activists, espousing ideas of “social justice” and “anti-racism,” have been working with the Fairfax County Superintendent Brabrand, the 12 Democratic members of the local school board, the Virginia Education Secretary Atif Qarni, state Democratic politicians like Sen. Scott Surovell and TJ Principal Bonitatibus in an organized campaign to not only undermine the school’s selective admissions process but also the very idea of STEM at the school.

They targeted the TJ admissions test — and its successful test takers, so many of them Asian — to achieve the unconstitutional goal of “race balancing,” a form of social engineering based on race. The Pacific Legal Foundation, which battles civil rights issues nationwide, issued a stern warning that school board officials were acting unconstitutionally — with bigotry.

How does this war on Asian-Americans play out? With months of building a narrative of Asian students as doping illegally for tests, as the Education Secretary alleged, and then questionable parliamentary shenanigans.

On the night of October 6, Superintendent Scott Brabrand and his staff presented a “merit lottery” proposal to overhaul TJ admissions. Principal Bonitatibus said she would recruit a diversity of TJ students by going to “barbershops,” “cultural street fairs,” “soccer games” and “Special Olympics,” where the inspiring athletes qualify because they have intellectual disabilities.

As a tick-tock of the transcript of the “work session” reveals, School Board Chair Ricardy Anderson, a former principal and teacher, interrupted the start of follow-up questions, known as “go-backs,” to capture a “pulse of the board” on the question of “the assessment.”

The TJ “assessment” is a Quant-Q math and logic test and ACT Aspire Reading and Science test, an objective measure for identifying northern Virginia’s most advanced students in math and science. Over the next minutes, she benignly said she wanted to get a “consensus” and a “concurrence” to upend the TJ merit-based admissions test.

TJ parents watched at home, stunned. They had filed an ethics complaint against Anderson for speaking two days earlier at a protest by 15 people from a lobbying group, TJ Alumni Action Group, rallying to nix the text. “I speak for the board,” Anderson had shouted into a microphone, to cheers, saying that the board members believed in immediate action “now,” in an “imperative” moment.

In a YouTube video, I captured the the ethical lapse that happened two days before the “work session” and the highlights of the parliamentary high jinx. (The full video of the meeting is visible in the official Fairfax County Public Schools video, with the death knell to TJ starting at 2 hours and 37 minutes into the meeting.)

Anderson asked fellow board members to “please lower their hands,” so she could get the “pulse of the board,” “some feedback to the superintendent,” some “consensus taking” on the “assessment” to TJ.

Board members responded, saying they were “confused.”

Was she talking about the TJ “test?” asked a board member.

The TJ admissions director weighed in that there was actually a “battery” of tests.

Board member Megan McLaughlin wanted to “bring clarity” on the vote, and she asked if this was “for this year” and wasn’t a “long-term decision.”

“Are we talking about forever and ever?” she asked.

Anderson handed the baton to board member Karen Keys-Gamarra, speaking about the “Quant-T” and the “barrier” tests.

The tests now had a new name: the “barrier” tests.

Keys-Gamarra said she had circulated some material to the board “that might help.”

It was still chaos.

“Are we in this moment directing the superintendent? Because I’m a little confused,” said Rachna Sizemore-Hizer, the only Asian American on the board.

No, Anderson insisted, interrupting and saying that she wanted to just help the superintendent: “We’re looking to get consensus, because we want to be able to give him substance of how to move on for Thursday, when he brings the next part of this presentation.”

Anderson kept diminishing what the board was doing, saying, “We’re not necessarily looking to give a direction” to the superintendent.

And then she asked for the vote, but then instructed board members to “lower their hands” because she had some “confounded” some issues, then told them to “raise your hand at this time,” when she wanted to get a vote on “removal of the assessment.”

Parents watching knew what this would mean: the death of TJ.

Sure enough, the next day, the TJ admissions office quietly added a new update to its website, rushing so quickly it misspelt the word “consensus,” stating:

The test was gone. The lynchpin of evaluating STEM merit was gone. Instead of asking why school officials had consistently failed to educate Black and Hispanic students so they had high aptitude in math and science, the school board, superintendent and school principal had demonized not just the test but the Asian American students who do well on it.

But the fix had long been in. The test was gone.

“It was a snow job in the middle of the night in the middle of a pandemic over videoconferencing,” says one TJ parent. “The Fairfax County school board was judge, jury and executioner to our amazing school.”

The school board and the school superintendent, Brabrand, had ignored our protests. Instead, that Thursday night, the school board struck through the word “merit” in a resolution they rejected anyway related to new public engagement.

For his part, Brabrand, the embattled superintendent, shared on the screen a response he would be sending to Virginia Governor Ralph Northam and Virginia Education Secretary Qarni, with his “diversity plan” for admission to the storied STEM school.

He forgot to include a critical word among the qualifications he’d be seeking from students: “STEM.”

Ten days later, this past Sunday, as students, parents, alumni and community members gathered for their memorial service for TJ, the iconic dome of the school rose high above them. They were mourning a loss but they were not abandoning the battle.

Zhou, the TJ alumni mother who stood before the group with a medal, declared loud and clear to friends: “We must continue to fight for our beloved TJ!”

Asra Q. Nomani, a former Wall Street Journal reporter, is the mother of a Thomas Jefferson High School student. This article was published originally on October 20, 2020 on Substack. 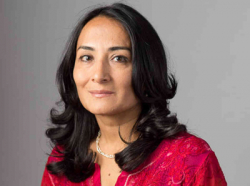 Asra Q. Nomani, a former Wall Street Journal reporter, is the mother of a Thomas Jefferson High School student. This article was published originally on October 20, 2020 on Substack.
View all posts by Asra Q. Nomani →
This entry was posted in Education. Bookmark the permalink.