When high-spending politicians are plunging our children deeper and deeper into debt and when government regulations and taxes are strangling our businesses, driving them overseas, why are so many good conservatives wasting time and resources circling the Export-Import Bank like a pack of wolves hungry to kill it?

Why are we attacking a small federal agency that (1) has operated at no cost to the taxpayers over the past 80 years, and last year produced over $1 billion to reduce our deficit, (2) has built a $4 billion loan-loss reserve fund when the last 5-year average loss claims were only $102.5 million, (3) helps reduce our perilous national trade deficit, and (4) helps level the international playing field for our brightest and best sunrise industries with high-paying jobs in America instead of jobs overseas?  Surely our conservative think tanks have more important priorities at this critical point for our economy and our country?

I ask this question as the retired CEO of a small manufacturing business with customers in 90 countries, one of the first companies in Virginia to win a Commerce Department Export “E” Award.  Exports at one point made up 40% of our revenues and we felt we were truly serving all Americans when the dollars we brought in from foreigners could be spent and multiplied in our own community.  With occasional financing help from Ex-Im we were helping reduce the nation’s trade deficit and were paying increased taxes to lower the national debt.

The economic theories of today’s critics of the Export Import Bank may work well for a closed national economy, where government help for one entity may disadvantage another, but they make no sense in the new global economy where a combination of business productivity and government policies determines competitiveness in international trade.

Let’s look more closely at some of the claims about Ex-Im.

I agree that government should not meddle in free markets, but government does have some responsibility to maintain a level playing field with opportunities for old and new firms to compete.  Unlike domestic markets, however, global markets are not “free markets.” The playing fields are not level. When an American company sells in foreign markets, it faces numerous obstacles, including some 60 country Export Credit Agencies (ECAs) helping their home businesses, and is burdened with (1) the highest corporate tax rate in the world, (2) a multitude of costly government regulations and high employee health care costs, and (3) a dollar that is generally overvalued, which automatically over-prices products produced in America.  Ex-Im financing with below-market interest rates is a small way for the U.S. to work toward a level playing field for American exporters in special niches where financing can make a difference without cost to American taxpayers.

If we seriously wish to level global playing fields, we should not abandon our only bargaining chip in negotiations with other countries.  We should not close Ex-Im without at least getting other countries to do the same with their ECAs.  Non-renewal of the Export Import Bank in September would be unilateral disarmament.

If the problem is crony capitalism or even actual fraud, let’s work for management improvement and transparency in Ex-Im’s operations, not close down the Bank.  Yes, the Bank selects individual companies to finance, but not every U. S. business is capable of exporting.  Any company that can cope with the extra hassle of language and culture differences, currency fluctuations, letters-of-credit and other paperwork problems has to be, by definition, one of our brightest and best sunrise industries. They earn their place on Ex-Im’s list and, in any case, they get no loan or credit unless they actually make the sale.

If someone tells you that some other firm lost a loan or credit somewhere else because Boeing or some other big exporter got help from Ex-Im, ask them who that other firm could be and why American banks are not making more loans with all the Fed’s cash sitting idle on their balance sheets.

PICKING WINNERS AND LOSERS – WHO WINS AND WHO LOSES? (AIRBUS?)

If someone tells you that Ex-Im is picking winners and losers, benefitting favored cronies with “corporate welfare,” remind them that if the exporter doesn’t close the sale, i.e., have a willing paying customer, there is no deal.  It is the foreign buyer who chooses the winners and losers, not Ex-Im.  The losers when we lose an export sale are the American company, the American worker who loses a good job and the American government that collects less taxes.

And the winner is …?  When it comes to who would benefit the most if Ex-Im were closed tomorrow, it would be Airbus Group, not the American people.  All the conservative rhetoric about closing Ex-Im simply provides free ammunition for some K Street lobbyist helping Airbus battle Boeing.

If Delta is upset that Euphrates Airlines got good financing on buying Boeing airplanes, remember that Euphrates could just as easily have bought Airbus to enter new routes that compete with Delta.  Eliminating Ex-Im will not solve Delta’s basic competitive problem with Euphrates.

If someone tells you that Ex-Im uses taxpayer money for subsidies, remind them that Ex-Im makes loans and loan guarantees, not cash payments. These are not taxpayer dollars going out to subsidize the American exporter, who gets paid only when the sale is made.  With any loan or guarantee there is the risk of future loan loss, but that is currently covered by a $4 billion reserve fund for loan losses.  Some would compare Ex-Im with Fannie or Freddie housing loans, but the future risk of Ex-Im loan defaults is very different from the risks in Fannie and Freddie’s sub-prime mortgages issued by banks who transferred away all the risk after making the loan.  Ex-Im borrowers have far higher credit ratings, the issuing private bank still carries a meaningful 15% of the risk, and Ex-Im loans are not being collateralized into a massive credit pyramid.

BOEING GETS TOO LARGE A SHARE OF EX-IM FINANCING

Why do critics tell us it is bad that Boeing is a big user of Ex-Im credit? Boeing employs some 82,000 workers in the state of Washington, plus over 60,000 workers in eight other states, and has thousands of other small business sub-contractors and sub-sub-contractors who benefit when Boeing wins an airplane sale.  Could Boeing survive without Ex-Im?  Of course they could, BUT, would they lose airplane sales to Airbus?  Yes, they would.  That also would mean losing hard-to-regain market share for our commercial airplanes and losing all the after-sale parts and service revenues that follow the sale of a new airplane. Do we want America to lose market share in a profitable long term commercial airplane business?

CONCLUSION:  THE GLOBAL MARKETPLACE IS DIFFERENT

I speak from personal experience when I say that the global market place is a tough market for U.S. firms, even the most innovative, and they need all the help they can get where competing governments and businesses are entwined entities.  What governments do has a great influence on how effectively their businesses are able to compete in global markets.

I’m a small government, free trade, no subsidies, no tax expenditures, free-to-choose believer and supporter — but there is a real world out there that I have lived and worked in, and think tanks need to recognize that world.  Ex-Im may not be perfect, and is run by humans who may not always do right, but don’t throw out the baby with the bath water.  We need exports to reduce our trade deficit.  Ex-Im may finance only 2% of America’s exports, but that 2% represents a critical market niche that we do not want to lose.

In his second inaugural address, Ronald Reagan said, “We cannot play innocents abroad in a world that’s not innocent.”  Let’s be realistic about the global world we live in and do what we can to increase exports that will support good jobs and reduce our trade deficit. 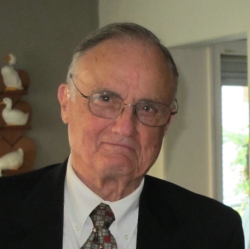 Latest posts by Gordon O. F. Johnson (see all)
This entry was posted in Business, Economy. Bookmark the permalink.