Posted on November 29, 2012 by matt ohern
Share this article on:

(As Congress struggles to avoid the “fiscal cliff” created by years of deficit spending and a huge economic blow to Virginia’s defense-related industries, this column provides an important perspective to this debate.  It is important that whatever actions are taken that we all understand the facts).

In a commentary entitled “Why America’s wealthy must pay more in taxes,” Robert Reich, a former U.S. Secretary of Labor under Bill Clinton, writes:

In fact, if you add up all the taxes paid — not just on income and capital gains but also payroll taxes (which don’t apply to income above $110,100) and sales taxes — most of us are paying a higher percentage of our income in taxes than are those at the top.
This statement, which is made in the context of federal taxes, is patently false. Reich and others arrive at such misleading conclusions by ignoring corporate income taxes, which happen to fall more heavily on the rich. They also use narrow measures of income that artificially inflate the tax burdens of lower-income households.
The truth is that when all federal taxes and all sources of income are accounted for, the wealthy pay a much higher tax rate than the middle class. Per the Congressional Budget Office’s latest estimates of federal tax burdens, households in the middle 20% of the U.S. income distribution paid an average effective tax rate of 11.1%, as compared to 28.9% for the top 1% of income earners.
The following graph displays the latest Congressional Budget Office data on federal tax burdens, which was published in July 2012. A measure of uncertainty is always inherent in such estimates, but there is not nearly enough uncertainty to make Reich’s claim even remotely plausible. 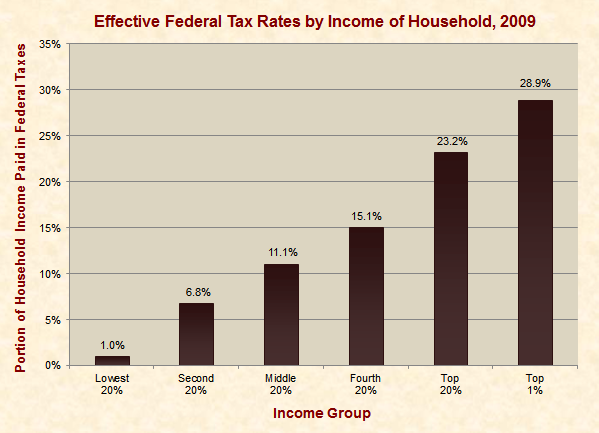 A recent poll commissioned by Just Facts found that 90% of people who were planning to vote for Barack Obama falsely believe that the middle class pays a greater portion of their income in federal taxes than the upper 1% of income earners. The same is true for 41% of people who were planning to vote for Mitt Romney. Such dramatic levels of misinformation stem not only from political rhetoric but also from a failure of journalists and educators to honestly inform the public. Relevantly, Reich is now a professor of public policy at the University Of California, Berkeley.

Latest posts by matt ohern (see all)
This entry was posted in Economy. Bookmark the permalink.