Do Those Who Doubt Climate Catastrophe Lack Scientific Credibility?

Posted on December 10, 2013 by matt ohern
Share this article on: 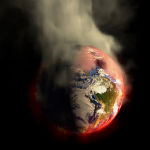 Heat-Trapping Gas Passes Milestone, Raising Fears,” declared a recent front page headline in the New York Times. The event that served as the catalyst for this article was the atmospheric concentration of carbon dioxide reaching 400 parts per million (ppm), up from 288 ppm or by 39% since the dawn of the industrial revolution in the mid-1800s.
Painting an ominous picture of the situation, the reporter, Justin Gillis, quoted scientists who proclaimed that:
• reaching this milestone “feels like the inevitable march toward disaster,”
• “we are quickly losing the possibility of keeping the climate below what people thought were possibly tolerable thresholds,”
• “we have failed miserably in tackling this problem,”
• “I feel like the time to do something was yesterday,” and
• “It’s scary.”
Amidst these dire assessments, Gillis quoted and quickly rebutted a lone dissenting voice to these scientists: Dana Rohrabacher, a Republican congressman from California. Simultaneously, Gillis alleged that “climate-change contrarians” have “little scientific credibility.” Based upon such reporting, one would think that no credible scientist doubts that manmade global warming is a grave threat to the future of the planet.
That narrative, however, is at odds with the fact that 9,029 Ph.D. scientists, including 3,805 atmospheric, earth, and environmental scientists, have signed a petition stating, “There is no convincing scientific evidence that human release of greenhouse gasses is causing or will, in the foreseeable future, cause catastrophic heating of the Earth’s atmosphere and disruption of the Earth’s climate.”

Latest posts by matt ohern (see all)
This entry was posted in Environment. Bookmark the permalink.