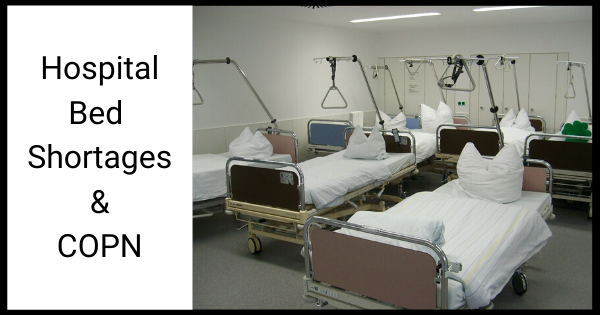 The hospital bed shortages cited by Jim Bacon in his post at his online blog Bacon’s Rebellion, “Not Nearly Enough Hospital Beds,“ is a direct outcome of how the Virginia Department of Health (VDH) has administered Virginia’s Certificate of Public Need law. Virginia’s scarcity of physicians and nurses also can be traceable in part to COPN’s denial of opportunities to doctors, as I have written previously, but this column will address the impact of the legislation on beds and facilities.
Virginia’s Health Commissioner has sole responsibility under the COPN law for determining how many beds are “needed.” Commissioners since 1973 have taken no discernible action to make sure there are enough beds, only that there are not too many, whatever that means on a given day.
The COPN Process. The VDH COPN Division makes recommendations on each application, and the Commissioner makes the decision. There used to be five regional review authorities that made recommendations before applications reached headquarters, but four of them died out and only the Northern Virginia regional authority survives. The judgments of approval or disapproval are entirely subjective.
Often the COPN Division has made a different recommendation than the regional review authority, or the Commissioner has made a different decision than recommended by the COPN Division.
There were 1228 applications for a certificate of need between the beginning of the year 2000 and the October 2019 COPN Monthly Report that I used as a source here. Of those applications:

I could cite more data but you get the idea. Remember every one of the applicants spent a lot of time and money on the planning and application process and expected approval. Hundreds more projects — mainly surgical centers and diagnostic imagery centers — were never initiated because physicians knew the score and did not bother to apply. The unwritten rule has always been that while hospitals and health systems may be denied a few applications, especially when they butt heads with one another, seldom will the state allow competition to threaten their core interests. The amount of money at stake has been and remains breathtaking.
The Effects on COVID-19 Capacity. Since the year 2000, VDH has denied dozens of applications and dozens more were withdrawn that would have expanded significantly the number of beds available for this emergency. Since the applications came from successful corporations with business plans supporting the projects, it fell to VDH to deny that business case based on its own vague concepts of need.
The certificate denials or withdrawals in the past 20 years that reduced pandemic capacity include:

What to do? This terrible law, so badly administered for almost 50 years, must be repealed. Tens of billions of dollars worth of decisions were made without the consistent applications of objective principles. The data since 2000 alone show that both the COPN process itself and the wealthy regional monopolies it created are ripe for an investigation by the Virginia Attorney General and/or the Justice Department.
This commentary was originally published on March 16, 2020 in the online Bacon’s Rebellion.