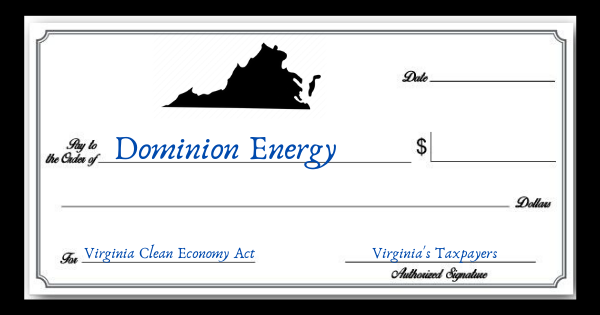 Gov. Ralph Northam and Dominion Energy combined their powers during the 2020 General Assembly to push to passage the Virginia Clean Economy Act (VCEA). Advanced by House Bill 1526 (carried by Del. Rip Sullivan, D-Fairfax) and Senate Bill 851 (patroned by Sen. Jennifer McClellan, D-Richmond), the VCEA strips the State Corporation Commission (SCC) of its constitutional responsibility to protect ratepayers from unreasonable and imprudent utility expenditures. Majorities voted for the bills despite warnings from both the SCC and the attorney general that the legislation essentially gives Dominion Energy a “blank check” to build the most expensive offshore wind project in U.S. history and create a half-dozen programs with few cost constraints.
The SCC estimates that electricity rates will increase by a minimum of 24% on top of existing mandated costs, such as ongoing transmission-line undergrounding programs in Northern Virginia or coal ash disposal. In total, it is possible that residential electricity bills could increase as much as $50 per month while bills for smaller industries could increase by as much as $235,000 a year. The residential increase is equivalent to one month’s rent in a basic one-bedroom apartment, a 3-hour course at a community college, two average car payments, two months of groceries, four months of Medicare insurance premium payments, or for industries, three full-time jobs at a small factory.
What about the social cost of carbon dioxide emissions? As some might ask, “Isn’t any cost worth the environmental benefits?” Despite that fact that neither the Virginia Department of Environmental Quality (DEQ) nor the SCC has ever developed a social cost of carbon dioxide test or measurement, the benefits of the VCEA’s offshore wind facility are no different than any other renewable energy resource. Further, the U.S. Environmental Protection Agency’s social cost of carbon measurement ranges from $7 to $50 per ton of carbon dioxide emissions. Using these measurements, the 33.5 million metric tons of carbon dioxide from Virginia’s entire electricity generation fleet has a social cost of $235 million to $16.8 billion. Yet, just one solution, the offshore wind project mandated in the VCEA, would cost Virginia ratepayers an estimated $15.5 billion over its expected service life.
As noted this past November by former SCC Judge Hullihen Moore, in a Times-Dispatch column, “The project energy cost is 13.8 times greater than new solar facilities.” Moore went on to state, “The forecasted cost of energy from the pilot is 78 cents/kWh.” For comparison, Dominion Energy residential customers currently pay an average electric rate of 10.83 cents per kilowatt-hour.
What about the economic and environmental benefits? Advocates have argued that the bills will address climate change and create 13,000 jobs. Yet, the bills have no performance requirements, no job-creation mandates, no ratepayer refunds for construction failure, no sea-level rise measurements or reductions, and no atmospheric carbon dioxide measurements or reductions.
Virginia gave an estimated $750 million in performance-based incentives to Amazon to create 25,000 permanent full-time jobs. Even the VCEA advocates have not clearly articulated how many of their jobs would be permanent full-time jobs and how many would be temporary construction jobs. Further, since Hampton Roads employers already have challenges finding skilled workers, what is to stop the utility project from simply luring workers from existing businesses across the commonwealth or importing labor from across the world?
Northam and Dominion Energy have not convinced consumers that renewable energy must be gold-plated. The VCEA’s environmental, social and economic goals can be achieved, but only with the unrestricted oversight of the SCC. Virginians should not have to choose between a car payment, rent, groceries, insurance, tuition or their electric bill. Virginians should not have to give Dominion Energy a “blank check” to achieve reasonable carbon reduction goals.
This commentary originally appeared in the March 12, 2020 issue of The Richmond Times-Dispatch.

Lee Ware
Latest posts by Lee Ware (see all)
Share this article on:
This entry was posted in Energy. Bookmark the permalink.